Just when you think you understand spiders, nature throws a wrench in the works to contradict the stereotypes. Wolf spiders in the family Lycosidae are supposed to be nomadic hunters, some of which live in burrows. Not so fast! Believe it or not, one genus, Sosippus, actually spins webs. I know! 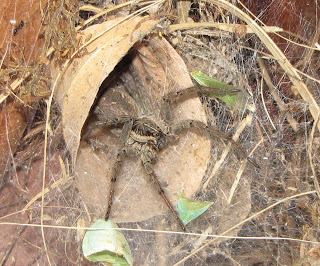 If you live in the southern U.S., Mexico, or Central America, you cannot assume that all the thick, sheet-like webs with funnel-like retreats are made by the true funnelweb weavers of the family Agelenidae. Sosippus creates nearly identical snares, sprawling over cacti, agave, and palmetto, or sprouting from rock crevices.

The two spiders also bear a close superficial resemblance to each other. The key to distinguishing them is to look at the eye arrangement. Despite being web-builders, Sosippus shares the eye pattern typical of its hunting cousins: The two posterior median eyes are large and forward-facing, underscored by a row of four much smaller eyes. Two more eyes, the posterior laterals, flank the others. Agelenids have a more compact eye arrangement, with eyes of relatively equal size. 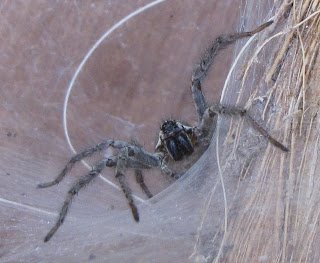 Six species of Sosippus occur in the U.S. The one shown here is S. californicus, which ranges from southern California to Arizona and south through Mexico to Costa Rica. I found it to be very common throughout southern Arizona. They are sizable spiders. Mature females measure from 14.7-17.6 mm (average 16.6) in body length, while males are 13.4-14.4 mm. The species is most abundant in riparian situations, living at the edges of stream corridors or wetland habitats. 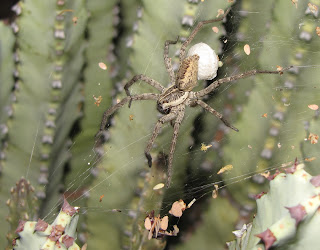 One of the behavioral traits that Sosippus shares with other lycosids is the “portable egg sac.” Females tether their egg sac to their spinnerets until the spiderlings hatch. Spiderlings ride on their mother’s back until their next molt, then share her web, sometimes for months. In captivity, older spiders seem capable of coexisting in a confined space provided they are fed regularly. Maternal females of the species Sosippus floridanus have been observed feeding their spiderlings for several months (Brach, 1976). S. texanus is a recorded host for the mantisfly Mantispa sayi, which means the spider’s eggs are consumed by the larval mantispid (Rice and Peck, 1991)

Next time you visit the Sonoran Desert, or the forest hammocks in Florida, keep a lookout for funnel-web wolf spiders. You are sure to find these arachnids to be fascinating residents of these ecosystems. 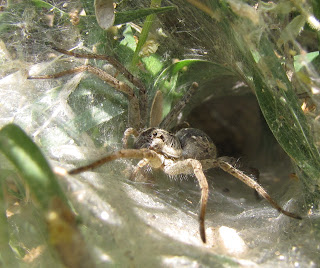