I worked on the identification of wasp and ant specimens collected in pitfall trap samples in 2009 at the University of Massachusetts. This proved quite a challenge as most of the insects were well under five millimeters in length; and they represented many families I was unfamiliar with in terms of their diagnostic features and biology. Among the most abundant were tiny wasps of the genus Trimorus. 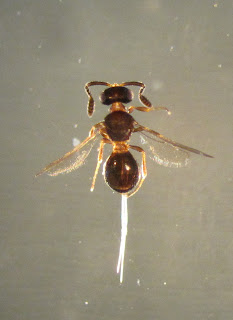 The specimens were from traps laid the previous year in watersheds in central Massachusetts. I was in the lab in Amherst putting them under a microscope and sorting and identifying them. My first impression of Trimorus was that I was looking at more than one genus, if not more than one family. The genus belongs in the subfamily Teleasinae, family Platygastridae. The wasps are sexually dimorphic (males look different from females) and polymorphic when it comes to wing length. 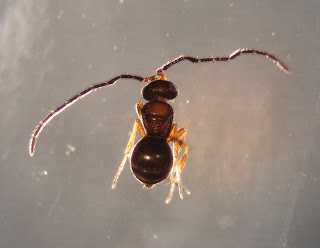 Once I learned that I was looking at one genus, if not one species, it was easy to identify them. Males have extremely long antennae of uniform width. Females, on the other hand, have short, clubbed antennae. Both genders can be fully winged, have wings reduced in size and non-functional, nearly wingless, or completely wingless (brachypterous). Nearly wingless individuals are actually “micropterous,” meaning the wings have been reduced to tiny flaps. 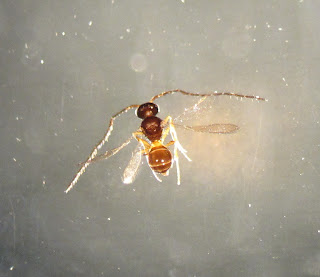 What was any kind of wasp doing in a pitfall trap, you ask? Pitfall traps are containers buried in the soil such that the opening is flush with the surface of the ground. A cover is usually placed over the trap to keep out rain and mimic a sheltering stone or board that a nocturnal animal would take refuge under during the day. Pitfall traps do not usually trap flying insects (unless baited with some kind of attractant). So, why would wasps be found in such a trap? 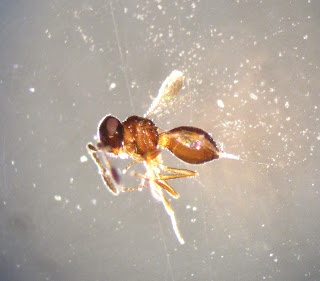 It turns out that at least most of the members of the subfamily Teleasinae are parasites of the eggs of ground beetles (Coleoptera: Carabidae). The female wasp lays her own egg inside the egg of the beetle. Not surprisingly, most ground beetle eggs are found on or in the soil. T. caraborum is recorded as an egg parasite of the ground beetle Chlaenius impunctifrons (Fouts, 1948).

These are truly minute insects, few if any exceeding two millimeters in length. Many are under a millimeter.

There are approximately 480 species worldwide in the Teleasinae, with 389 species of Trimorus known globally (Austin, 2005). This is probably only a small fraction of the total fauna, as many new species await description and/or discovery.

Up until recently, the Teleasinae was placed in the family Scelionidae. Molecular analysis led to the “demotion” of the Scelionidae to a subfamily itself. 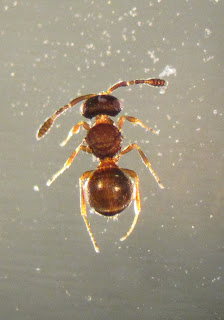 The sheer diversity and abundance of Trimorus, and other members of the Teleasinae, point to their great importance in ecosystems. It would pay us to look a little more closely at the species close to our own homes. Who knows what discoveries await us?