Here is a wasp that is still a wasp, but probably not the wasp you think it is. Did that make any sense? I know the first time I saw the spider wasp Poecilopompilus algidus, I thought it was a paper wasp (genus Polistes in the family Vespidae). Mimicry is not always a case of some defenseless organism looking and acting like a venomous, poisonous, or otherwise potentially dangerous animal. 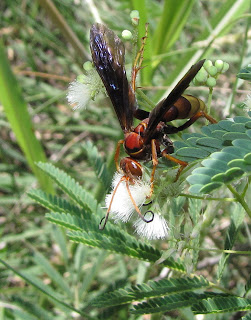 Müllerian mimicry describes instances in which two or more species that are capable of defending themselves share a similar “look,” especially in color and pattern. Müllerian mimicry is named for German naturalist Fritz Müller, who first recognized this widespread survival tactic. Many well-armed species sport bold markings known as “aposematic” or “warning” colors.

I can attest from personal experience that Poecilopompilus spider wasps can back up their advertisement. The only specimen I collected of P. interruptus, in Cincinnati, Ohio, gave me a sting to remember! Ironically, the only other sting I recall with more vividness was from a Polistes aurifer paper wasp that I got when I was a careless child.

Poecilopompilus is a mostly tropical genus with only three representative species that reach the United States (P. flavopictus is recorded only in extreme southern Texas). 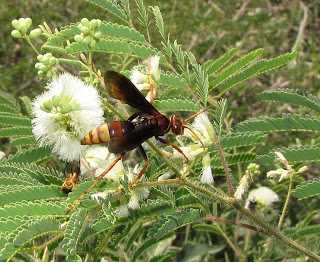 I just learned something new in researching this article. P. algidus has a much more widespread distribution in the U.S. than I had previously thought. It occurs from California to Arizona, Utah, Texas, Florida, and north to South Dakota, Minnesota and Michigan, even Massachusetts. Even more amazing, its mimicry is quite “plastic.” While in the south it tends to resemble a large paper wasp, in the north it may masquerade as another spider wasp in the genus Anoplius: Almost completely black with red bands on the top of the abdomen, as in this specimen. Not surprisingly, this insect is divided into at least four subspecies. The one I’ve imaged here is P. algidus coquilletti. 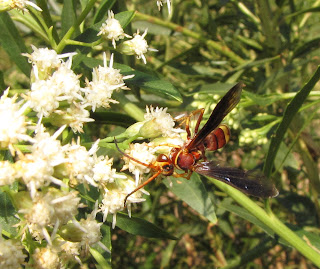 One cannot reliably use color patterns to even separate this species from P. interruptus, and equally widespread member of the genus. They key characters to look at instead are the spines on the front tarsi (“feet”) of females, and the inner margin of the eyes.

The biology of these spider wasps is not especially well-known, though all are thought to prey exclusively upon orbweaver spiders in the family Araneidae. I have personally observed a female Poecilopompilus transporting a Western Spotted Orbweaver, Neoscona oaxacensis down a road in southern Arizona. My friend Margarethe Brummermann was able to document it here.

The female wasp stings her victim into weak paralysis and then hauls it backwards overland to a suitable nesting spot in bare soil. There she will deposit her burden, often in the crotch of a grass tussock or other vegetation, and begin excavating a shallow burrow. She may bite her way through hard soil, then kick the resulting crumbs beneath here with her front legs. The tunnels made by P. interruptus vary from 2.5 to eleven centimeters deep, angling from 45 to 90 degrees. The density of the soil might have an effect on depth. At the bottom is a spherical chamber where the prey is placed and a single egg laid upon it. Great care is then taken in filling and concealing the burrow entrance, the better to discourage potential parasites and predators.

One is most likely to see members of the genus Poecilopompilus on flowers, or on extrafloral nectaries of sunflower (Helianthus spp.). They are conspicuous insects in size as well as color, females of P. algidus coquilletti varying from 15-20 mm in body length, males 13-17 mm. 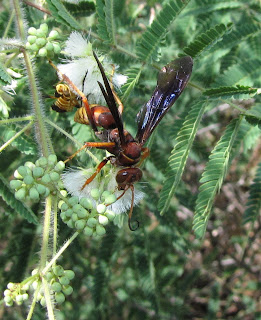