A surprising number of spider families spin the familiar wheel-like webs we see in our yards, gardens, and parks. While most orb webs you see are produced by “ecribellate” spiders that spin glue-studded silk to catch prey, some orbs are spun by “cribellate” spiders that use “hackled,” non-sticky threads to ensnare victims. The most common cribellate orb weavers in North America belong to the genus Uloborus, family Uloboridae. They are known as “featherlegged orb-weavers” for the tuft of hairs midway down each front leg that several species display. They are also called “hackled band orb-weavers.” 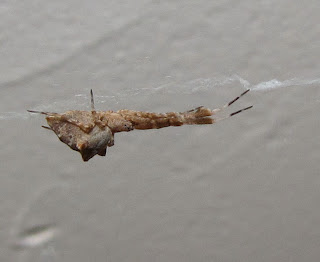 The Uloboridae also includes the triangle spiders I wrote about previously. These are very small arachnids. Mature Uloborus are only 3-6 millimeters in body length, males slightly smaller. Five species in the genus occur in North America, collectively distributed across the entire U.S. and southern Canada. 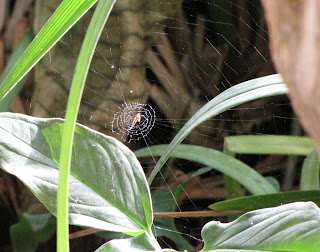 Webs of Uloborus are relatively small, usually horizontal orbs that may sport a stabilimentum (thickened, often zig-zag patterned band of silk). The stabilimentum may take the form of an auxiliary spiral, or a linear band running through the center of the web. The web shown above is one I discovered inside the greenhouse at the Tucson Botanical Gardens where the seasonal “Butterfly Magic” exhibit was in full swing. While the spiders cannot capture the large butterflies in such an exhibit, the silk can still incapacitate the insects and render them incapable of flying or feeding properly. I have also found featherlegged orb weavers at the mouth of culverts, and a variety of other outdoor situations.

Female Uloborus construct small, flattened, papery egg sacs (see image below, with recently hatched offspring). The egg sac is usually near the periphery of the web, and there can be several in a row. 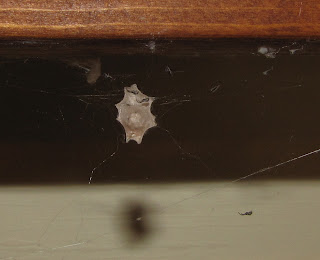 The hatchlings build an orb web immediately after they disperse, but their webs differ greatly from those of more mature individuals. This is because they are born without their trademark attributes: a cribellum and a calamistrum. Consequently, the webs of recently hatched spiderlings have many additional radii (spokes), and the auxiliary spiral is retained at the hub (center). After its second molt, the spiderling is able to spin a “normal” web (Foelix, 2011).

There are competing theories on to whether orb webs evolved independently among cribellate and ecribellate spiders, or if the orb web came about only once. The convergent theory that proposed the orb web evolved twice held sway for many decades, but recent studies of spiders, and the molecular analysis of their silk, has now given weight to the assertion that the orb developed only once in the evolutionary history of spiders (Foelix, 2011). 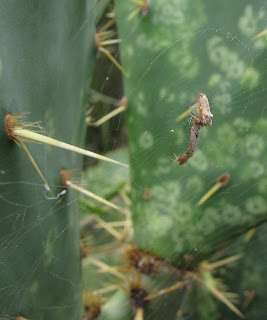 These are truly remarkable arachnids. Remember that all members of the family Uloboridae lack venom glands, so are unable to quickly subdue prey by biting it. Instead, they kill by constriction. They wrap the victim so thoroughly that the silk binding compresses the softer body parts, and can even break antennae, legs, and other appendages. I suspect the silk may also shrink as it dries, further tightening around the insect until it dies of asphyxiation.

I leave you on that happy note to go seek for yourself the little wonders of the arachnid world around your own home and garden.