Attention: You. Yes, you. I welcome your images of mystery insects and spiders from anywhere in the world, and will blog the answer to share with others if I have your permission to publish the images. The following is one example of how this might appear.

I often receive inquiries through my private e-mail, asking if I could identify this insect or that spider, sometimes from other corners of the world besides the United States. This is always a welcome challenge, but the emphasis is usually on “challenge.” Not long ago, my friend Paul Kaufman sent me three wonderful images of a social wasp taken by Pablo Yoder, a missionary in Nicaragua. At least I recognized it as something in the family Vespidae, but there is a vast number of genera and species in the neotropics. 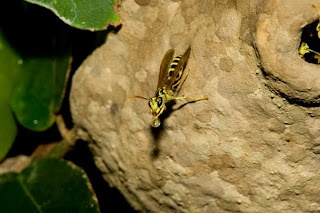 Thanks to Google image searches, I eventually pinpointed the wasp as the species Polybia emaciata. It is one of the few social vespid wasps that builds its nest of mud instead of paper. The more durable nature of the mud envelope allows the wasps to “hunker down” or flee when faced with a potential attack by a vertebrate predator. Contrast this behavior with the violent attacks launched by social wasps that build relatively flimsy nests of paper.

Enclosing a nest helps protect the eggs, larvae, and pupae that inhabit each cell in the horizontal layers of combs made by social wasps. Exposed combs are more vulnerable to predators and parasites since the adult wasps cannot be everywhere at once guarding each member of the brood.

So what is the wasp in two of these images doing with a big drop of water in its jaws? It is essentially bailing out the nest, keeping the mud from becoming saturated. It rains hard and often in the jungle. Even though the nests of wasps are usually ensconced beneath foliage in the rainforest canopy or understory, a good quantity of water still reaches those nests. The workers begin drinking the water, then walk to the edge of the nest and regurgitate droplets. The thick mud walls of the nests of this species take longer to become saturated than do paper nests of other species, but there is still cause for concern on the part of the nest inhabitants.

Nests of Polybia emaciata are typically inhabited by a small number of adult wasps. Colonies usually number between 100 and 500 wasps, while other species would have a much larger number. The nests vary in size from roughly nine centimeters to 22 centimeters in length, as least in one study in Panama (O’Donnell & Jeanne, 2002). The nests may also persist for several years due to their durability. 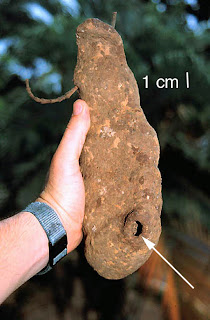 O’Donnell and Jeanne elicited nest defense responses by tapping on the exterior of the nests, or blowing into the entrance hole. Most wasps would respond by rushing out of the nest and either attacking immediately or adopting an agonistic (warning) posture while perched on the exterior of the nest envelope. Not so with Polybia emaciata, which either flew away (though not abandoning the nest), or took refuge inside. Only sustained, escalated provocation resulted in the wasps exiting the nest, then pummeling and attempting to sting the researchers. Natural predators of tropical social wasps include birds, bats, and monkeys. 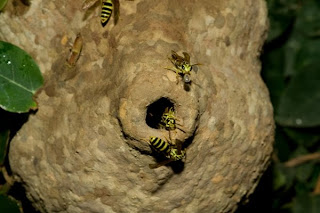 The diversity of wasps in the tropics, their survival strategies, and their relationships to other organisms is fascinating. I hope to one day see some of these remarkable insects for myself, but in the meantime I appreciate my readers sharing their own experiences and images.