I was fortunate enough to find many interesting insects and spiders while living in South Deerfield, Massachusetts in 2009. One nice surprise was stumbling upon a specimen of the sheetweb weaver Drapetisca alteranda. Not only is this spider quite small (females are only 4-4.5 millimeters in body length), but it is exceedingly well camouflaged. Oh, and nocturnal, too. 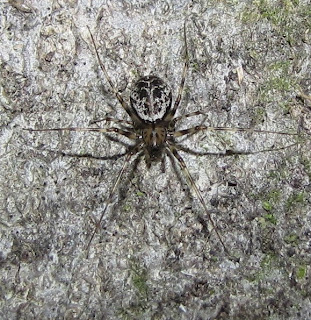 This spider is atypical of the family Linyphiidae and can be easily mistaken for something like a lynx spider or other hunting spider that does not spin a web, but waits in ambush instead. Drapetisca lives on tree trunks where it sits motionless. Close inspection reveals that it is actually not in contact with the surface of the tree, but sprawling across the thinnest of snares.

It was by sheer luck that I noticed the specimen imaged above. I was seeking insects and arachnids around a bright light outside the town library the night of July 30. The light illuminated not only the exterior of the library, but a nearby tree as well. Ants, beetles, and other insects paraded up and down the trunk, and I found at least one Common House Spider in her snare under a branch. My flashlight eventually revealed the Drapetisca at roughly shoulder height, much to my surprise and delight. 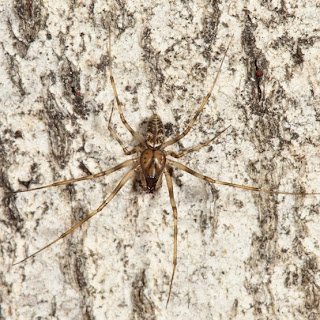 This spider is, unfortunately, best identified by characters that are not easily observed in the field. The jaws are armed with a set of three or four long spines that criss-cross (see image below). The female’s external genitalia (epigynum) are also diagnostic, but that necessitates turning the spider over and putting her under a microscope. Still, the overall appearance of the spider, and its posture on its web, help to eliminate other potential suspects. 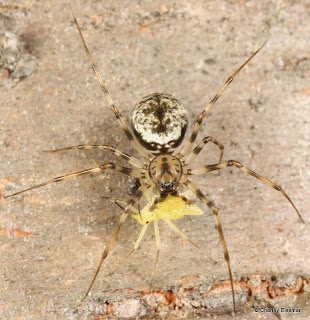 As is the case with most organisms that are of no economic importance, precious little is known of this spider’s biology and distribution. It appears limited in its range to southern Canada and the extreme northern U.S. It is common in New England, and recorded from the Great Lakes region, Montana, Alberta, and British Columbia. It may be absent from the northern plains. 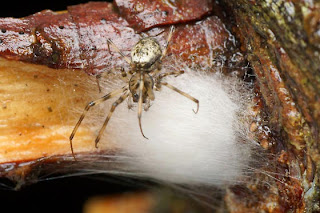 Your own persistence and patience in seeking spiders like this one could reveal much new information. Nothing ventured, nothing gained, so do share your own images and observations.