There's a Moth in my Salad!

Entomophagy is the term for the intentional consumption of insects as food; but you would be surprised by how many insects turn up in foods we eat regularly. Two recent incidents reminded me that it is remarkable we don’t find more recognizable insects in our food, and why it shouldn’t bother us anyway.

I was having lunch with my wife and various friends from church at a chain restaurant on Sunday, April 6, when one member of our party discovered an intact moth, yes moth, amongst her salad greens. We were both eating the same salad, so I was a little more careful with succeeding bites. I took home the specimen and discovered it to be a member of the Noctuidae or Erebidae family. This wasn’t surprising since the caterpillars of many owlet moths are notorious crop pests, several of which are known as “cutworms.” 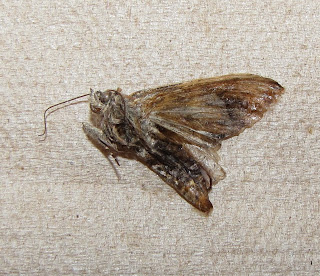 The prevalence of insects or insect parts is so commonplace and unavoidable in the harvesting, processing, storage, and shipping of food products that the Food and Drug Administration publishes an entire handbook on the subject of Food Defect Action Levels. The allowable number of insect parts, or even whole insects (collectively referred to by the unsavory term of “insect filth”), varies markedly according to each food product.

On the other end of the spectrum, we have situations whereby perfectly innocuous vegetable matter is interpreted by a restaurant patron as an insect. I received a sample of material obtained from a meal at another chain eatery. Previous casual observations of the “specimens” by other parties concluded they were either insects or the parts of one insect. My own examination revealed no segmentation, no differentiation of body parts, and therefore no insect(s). The resemblance is, arguably, startling, kind of like camouflage or mimicry in reverse. 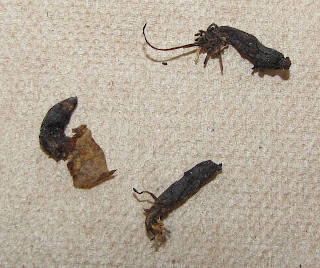 The blackened, fibrous roots or stems masquerading as bugs were, of course, a cosmetic issue, just as an actual insect would be. With few, minor exceptions, insects in your meal pose no health threat whatsoever. We are simply accustomed to pristine produce, unblemished fruits and vegetables. Our crops are sprayed will all manner of insecticides, waxes, dyes, and other coatings to give us this standard. It is akin to airbrushing and “Photoshopping” images of models to present us with an unrealistic standard of human beauty.

I will still find it gross to come upon an insect in my salad, or a fly in my soup, but it won’t bother me beyond that. I was quite impressed with the nonchalant reaction of our friend, who simply removed the moth and went on eating….without calling a lawyer, even.