One of the few insects to have poked its head out while we still have the threat of snow here on the Front Range of Colorado is the Cow Path Tiger Beetle, Cicindela purpurea. Also known as the “Purple Tiger Beetle,” it seems to come in just about every color except purple. Whatever its wardrobe, it is a welcome sight and a challenging subject to stalk and photograph, whether here or elsewhere on the continent. 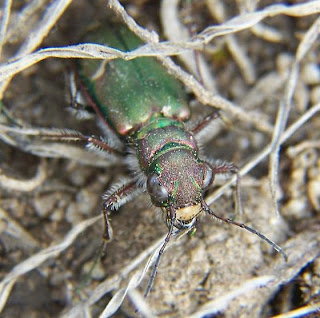 Tiger beetles in North America typically have one of two emergence patterns. Some have a two-generation spring/fall cycle whereby the adult beetles are present in those two seasons. Others have one generation seen only in summer. Many species also have specific habitat requirements, making them hard to find in the first place. Then there is the fact that if they aren’t moving, you have a hard time seeing them.

These beetles also earn their name: they are efficient predators of many other insects, even ants. They have reasonably keen vision and run swiftly, like diminutive cheetahs. They run so fast, in fact, that they can literally outrun their eyesight. When sprinting after a potential meal, they go blind, and must stop to re-focus. This run, stop, run behavior helps to identify them in the field. Get too close to one and it will fly, usually a short distance, land, and resume its darting gait. 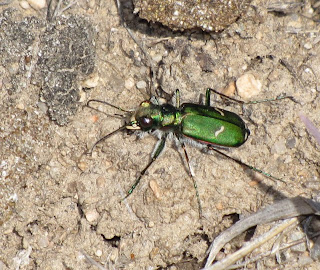 Tiger beetle larvae are also predatory. Each lives in a (usually) vertical burrow just wide enough to accommodate the grub. A hump midway down its body, armed with hooks, anchors the larva against one wall. The overall appearance of the grub is an “S” shape. The flattened head of the larva is flush with the rim of its tunnel as it lies in wait for a hapless insect to blunder by. It then lunges with lightning speed, grabbing the victim in its jaws. When disturbed, a tiger beetle larva rapidly descends deep into its lair. 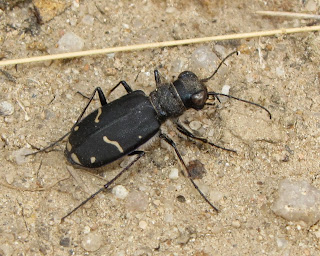 Adult Cow Path Tiger Beetles measure 12-16 millimeters and may be matte green, metallic green, bluish, black, or bronze-purple with green highlights. The species has been divided into named “races” based on these differences. Most have consistent ivory markings: a spot at the tip of each elytron (wing cover), and a mark that looks like an oblique tilde symbol (“~”). There may or may not be an additional spot near the edge of the elytron between the squiggle and the terminal spot. 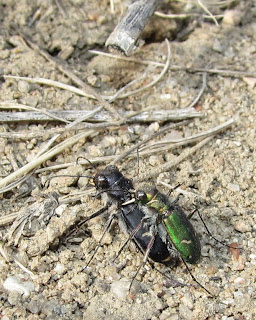 It is not unusual to find two different color morphs to be mating, as shown here. They recognize each other by the dimples in the female’s thorax, which fit the teeth on the male’s jaws like a lock and key. Attempted mating by the male of another species would be futile, as his jaws would slip off her thorax.

Look for these lovely beetles in degraded prairie habitats, where there is sparse grass and plenty of bare patches of earth. They are not often found in large numbers, and while much of a given landscape may look to us to be hospitable to them, they can be sporadic at best. 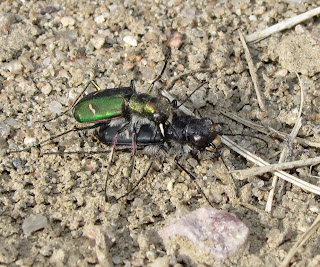 The good news is that Cicindela purpurea is a very widespread species found over most of the northern three-fourths of the U.S., plus adjacent southern Canada. It is largely absent from the mid-Atlantic states, southeast, Texas, and coastal areas of the Pacific states. April, May, and September are the months this species is most abundant. Keep in mind that some years they might emerge earlier or later, depending on how mild the winter is.