I have neglected butterflies on this blog for the most part, as there are plenty of other blogs about them, books and websites, too. Plus, let’s face it: they are easy to love. My general mission is to stir a passion for other insects and invertebrates. That said, at this time of year along the Front Range of Colorado, certain butterflies are the most obvious of insects. The Mourning Cloak, Nymphalis antiopa, is also admirable for its sheer durability. 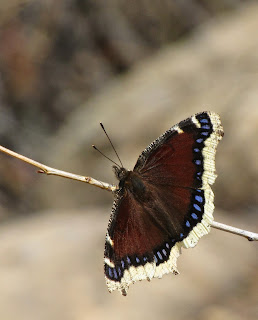 This butterfly is one of the “tortoiseshell” butterflies, a subgroup of the family Nymphalidae, collectively known as “brushfoots.” Look at any nymphalid and it looks like the insect has only four legs instead of the customary six. The front legs are greatly reduced in size and drawn up close to the head, where they function more like extra mouthparts than legs. The female butterfly scratches leaves with those tiny legs, causing the plant to produce volatile compounds that the butterfly analyzes to make sure it is a proper host plant on which to lay her eggs.

Tortoiseshell butterflies overwinter as adult insects, crawling into crevices and cavities in logs, stumps, and other protected spots. A warm winter’s day will see them taking wing, before going back into hiding until early spring. 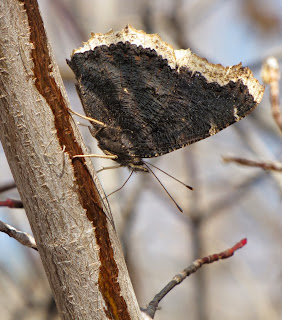 Once a Mourning Cloak emerges from hibernation, it seeks sustenance to fuel its flights. A favorite source of nourishment is sap oozing from wounded trees. Indeed, a sap flux can quickly become a mecca for these butterflies, as evidenced in the short video below. They are amazingly tolerant of each other’s company considering their usual behavior. 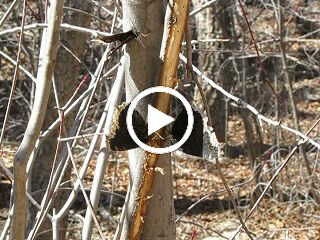 Male tortoiseshell butterflies are highly territorial, each one staking out a patch of real estate that it defends vigorously from other males, and even from other species. I say many a battle between a male Mourning Cloak and a male Hoary Comma on April 11, the day I shot most of these images along a riparian trail near the Bear Creek Nature Center in Colorado Springs. The insects would often literally bang into each other during their aerial dogfights.

While males quickly become tattered and exhausted, females, once mated, set about to find suitable host plants on which to lay eggs. You will find the Mourning Cloak to be most abundant in willow thickets, as Salix spp. are the favored hosts. Caterpillars will also feed on elm, birch, poplar, hackberry, rose, mulberry, and other trees and shrubs to a lesser degree.

Large masses of eggs, typically 100-200, are laid by the female, the ova encircling a branch or twig. The caterpillars pass through five instars (an instar is the interval between molts), eventually topping out at about 5 centimeters (two inches) in length. Black with white speckles and maroon spots, the larvae are studded with spikes. 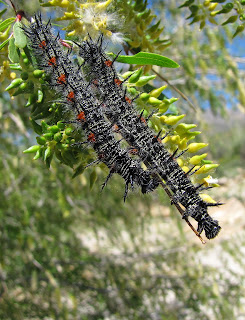 They occur in large groups, so when you find one you will usually find several more nearby. During their younger instars they share a loose, tent-like web for protection from predators and parasites.

By June or July another generation of Mourning Cloaks is on the wing. There may be two generations in the southern reaches of this butterfly’s range, but at higher elevations and latitudes there is but one generation produced each year, fresh adults emerging in late August or early September.

The Mourning Cloak is holarctic, meaning it is found throughout the northern hemisphere. In Britain it is known as the “Camberwell Beauty.” Here in North America, it ranges from Alaska to Mexico, and the Pacific Coast to the Atlantic seaboard.

Few insects live as long as a Mourning Cloak in the adult stage. On average, they survive 10-11 months, though much of that is sequestered in a hibernaculum. They are always a welcome sight, and a true harbinger of spring if ever there was one. 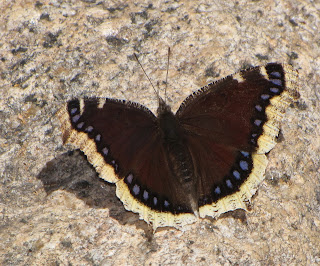