This past Wednesday, April 9, I went exploring near my home to see what insects are out and about here in Colorado Springs this spring. In my wanderings I stumbled upon a few bones of some large mammal, providing an opportunity to find insects specific to carrion. 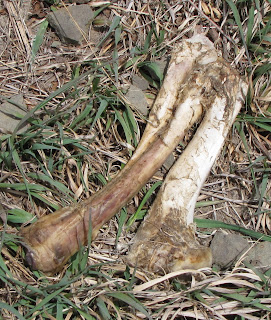 I am not terribly keen on handling carcasses, but these leg bones were mostly dry. The ligaments were still intact on one leg, but flies had long lost interest in these remains. Still, it takes little to attract ants, and some kinds of beetles. I managed to find three species large enough for photos, plus a couple very tiny rove beetles (family Staphylinidae) that quickly vanished when I turned over the bones.

The first insect I saw was, oddly, a Small Milkweed Bug, Lygaeus kalmia. Many normally herbivorous Hemiptera are opportunistic scavengers, though, so perhaps the appearance of this insect should not have been terribly surprising. The second insect was one I expected, and present in fair numbers considering the relative size of the carcass: Common Carrion Beetles, Dermestes marmoratus. 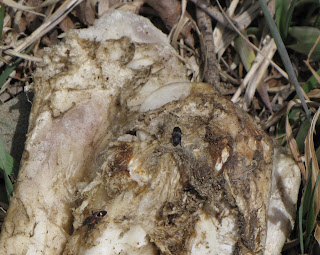 Dermestids are so efficient at scouring the last vestiges of flesh from bone that natural history museums employ colonies of the beetles to clean skeletons. This particular species, a relative of that indoor pantry pest the Larder Beetle, is a handsome insect measuring 10-13 millimeters. The silvery-gray scales on its otherwise black body make it look quite dapper considering the situations it frequents. D. marmoratus is found from southern California through the southwest, southern Rocky Mountains, and Great Plains states. 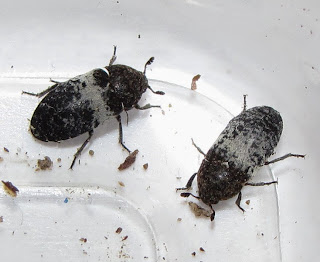 The most spectacular specimen uncovered was a Northern Carrion Beetle, Thanatophilus lapponicus, also known as the Silky Carrion Beetle. It looks superficially like a giant dermestid, 8-15 millimeters in length, but it belongs to an entirely different family, the Silphidae. This species is holarctic, meaning it ranges across the entire northern hemisphere. In North America it is found in Alaska, Canada, and the northern tier of states in the U.S., plus the Pacific states to Baja, Mexico, and the Rocky Mountain states. The adult beetles have been found from March to October. Perhaps its hairy body helps to insulate it against cooler temperatures. 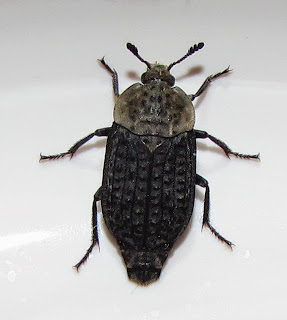 The last beetle species I collected was a type of sap-feeding beetle in the family Nitidulidae. At only 3-5 millimeters, Nitidula ziczac is difficult to spot, let alone get a clear image of. Despite their name, sap-feeding beetles are highly diverse in their appetites. Some species are found in abundance inside yucca flowers, for example. N. ziczac is a well-known associate of carrion, found in North America mostly from the Great Plains westward, as near as I can tell from various references. 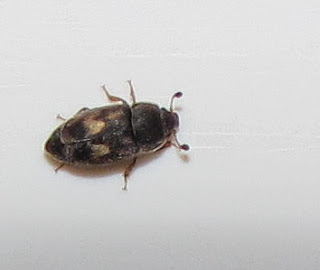 What truly amazes me about carrion-inhabiting insects is how they manage to locate such a scarce resource. They need the energy to fly to far-flung bodies, at just the right time. Certainly their olfactory powers are light years ahead of us humans (I detected absolutely no odor from these particular bones), and tuned specifically to aromatic compounds liberated during decomposition. However they do it, thank goodness they do, or we would be forever tripping over dead animals, before becoming deathly ill ourselves.