One of the most abundant, yet inconspicuous grasshoppers in North America is the little White-whiskered Grasshopper, Ageneotettix deorum. Easily overlooked as just another drab grasshopper, it can be easily recognized by its white antennae and red or orange hind tibia ("shin" segment on the hind leg). 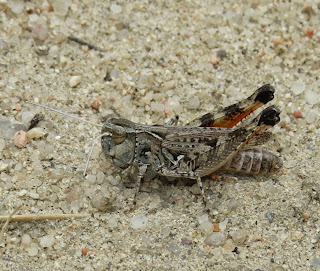 This species is a member of the family Acrididae and the subfamily Gomphocerinae, known as slant-faced grasshoppers. The head of the White-whiskered Grasshopper is not as acutely sloped as its relatives, but it shares other subtle characters in common.

While most slant-faced grasshoppers are found clinging to grasses in the vertical plane, A. deorum is perhaps most often seen on the ground. When flushed from its hiding place it may leap into the middle of a trail where it could either hunker down, hop away again, or crawl rapidly into nearby grass tussocks. Only when it is walking do you easily see those bright red hind legs. 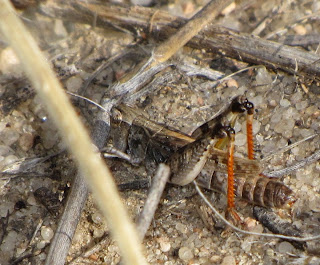 This is not a particularly large grasshopper, males ranging from 11-28 millimeters, female 15-28 millimeters. It is one of the few species in which both genders are nearly identical in size.

The White-whiskered Grasshopper occurs from the Great Lakes (Michigan, south and west to Indiana, Minnesota, and Illinois) through most of Missouri, western Arkansas, and Texas, all the way to the Pacific coast (southeast British Columbia, eastern Washington and Oregon, and much of California). Adult specimens can be found commonly from mid-July through early October. 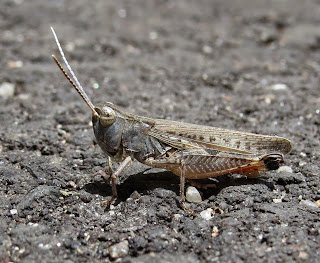 Ageneotettix deorum frequents dry grasslands with short grasses, so I find it abundantly here in Colorado Springs on the fringe of the Great Plains. I still get confused periodically because of the variability of this species in terms of size and markings. Larger individuals can certainly be mistaken for grasshoppers of other genera. Other grasshoppers can have white antennae, and the White-whiskered Grasshopper can occasionally have darker antennae. The hind tibia is usually hidden under the edge of the hind femur when the insect is at rest, and there are simply few other consistent markings to go by. 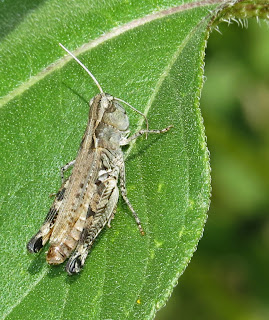 The sheer abundance of this species puts it in the category of a rangeland and crop pest. During outbreaks there can be up to 25 adult specimens per square yard; and the species can account for fifty percent or more of the grasshopper fauna. Wheat is particularly vulnerable, but A. deorum also enjoys Kentucky Bluegrass and other kinds of music...I mean....forage. It will even feed on dried, fallen grassblades, seeds, dung, and deceased insects.

Eggs are laid in the soil in the summer and fall, hatching the following spring. Nymphs progress through five instars before reaching adulthood, roughly 40-48 days after emerging from the egg. The adults fly well, but flights are generally short (3-6 feet), and mere inches over the ground. 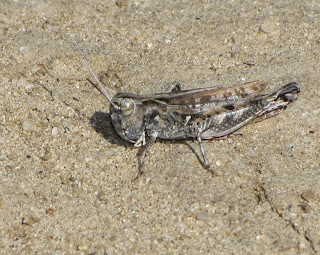