Some insects are so unique that they cannot be mistaken for anything else. The planthoppers in the genus Scolops, family Dictyopharidae, are cute, squat little insects with an elongated "nose." Think of the caricature of Cyrano de Bergerac, shrunk down to about 5-8 millimeters. 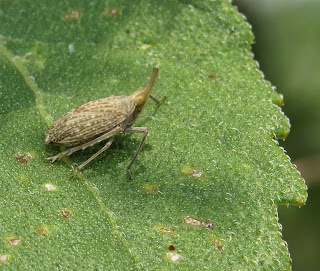 a specimen from Colorado

There are currently 32 recognized species of Scolops, and the genus is unique to southern Canada, the U.S., and northern Mexico. Though they feed on plant sap, they are not pests of any crop, so consequently very little is known about their biology. They all look pretty much alike, being straw-colored, brown, or gray with the characteristic horn. 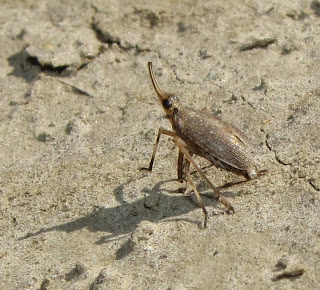 a specimen from Iowa

Some species have short-winged forms in addition to the usual long-winged form. Differences in the venation of the front wings have been used in separating the species. The number, length, and arrangement of spines at the tip of the hind tibia ("shin" segment) has also been a character used to differentiate similar species.

The fourth-instar nymphs of at least some Scolops species produce wax from glands near the rear margin of some of the abdominal segments. Most planthoppers in the superfamily Fulgoroidea produce waxy secretions that help repel predators, or disguise the 'hopper as cottony plant debris. 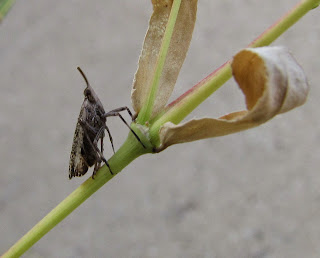 a specimen from Arizona

In my own experience, Scolops are most common in arid habitats, especially dry fields, prairies, and grasslands, even in otherwise moist climates. There are a few host plant records for these planthoppers, compiled on the University of Delaware website cited below. Most host plants seem to be in the families Asteraceae and Chenopodiaceae.

I call Scolops "rhinoceros planthoppers," but there appears to be no formal common name for the genus. One species, S. perdix, is known as the "Partridge Scolops." They certainly can "hop," and this habit may make it difficult to know whether a given specimen is feeding on a particular plant, or simply landed there after hopping to escape your approach. 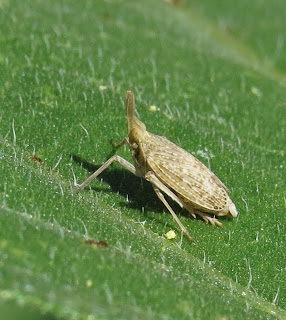