Aphids are the insect equivalent of the wildebeest: they exist in vast numbers, and pretty much everything else eats them. Some other insects even specialize on aphids as prey. Chief among those are the "aphid wasps" in the genus Pemphredon, family Crabronidae (formerly a part of the family Sphecidae). 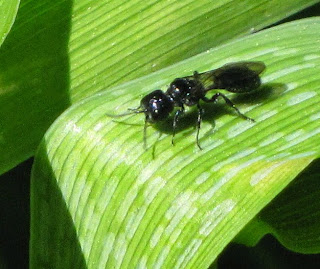 Not surprisingly, aphid wasps are not very large. Most are only ten millimeters in length if not smaller. They are solid black, and look a bit like a miniature thread-waisted wasp, the abdomen being on a short stalk (petiole) attached to the thorax. They have a cubical (square) head. These wasps are forever on the move, so it is very difficult to observe them, let alone get images.

The genus Pemphredon includes 20 recognized species in North America north of Mexico. Collectively, they range over most of the continent. 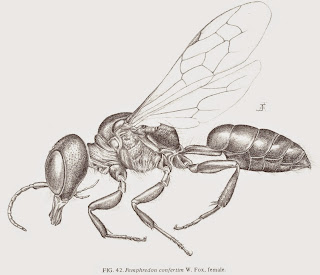 Aphids are most abundant in spring and fall, so it is no surprise that Pemphredon are most commonly seen in May, then again in August and September. Pay attention to any aphid colony on a tree or weed, and eventually you will see these little wasps hunting. It is likely they also feed on aphids as adult wasps. Aphid wasps will visit flowers, but are only occasionally seen on blossoms.

Pemphredon are solitary wasps, each female making her own nest. She uses pre-existing cavities in wood, hollow stems, or she tunnels through the pith of broken twigs or berry canes. In fact, stems with thorns may be preferred because they are not likelyto be consumed by vertebrate herbivores. 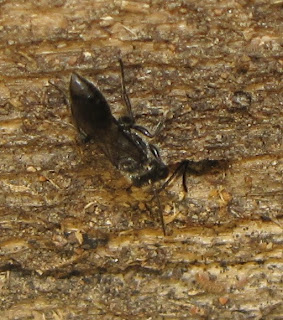 I once spotted an uncharacteristically motionless Pemphredon on the side of a log. It was unmoved as I took images, until....a female made a hurried exit from a tunnel. Both wasps landed so close to me that I managed only one half-focused image of the pair, male on top, before they split. He had been waiting just outside her nest tunnel in hopes of mating with her. You can see her two antennae protruding from her hole, just in front of the male wasp in the above image. 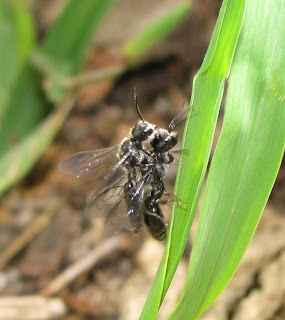 The female wasp hunts aphids in their colonies, plucking them off stems and leaves with her jaws, stinging them into paralysis or simply crushing them, and then flying them back to her nest. She will stockpile ten to several dozen victims. One industrious female Pemphredon lethifer in England harvested 89 aphids for one cell! She will lay an egg after the last victim is gathered, but the egg may be placed at the back of the cell or halfway to the front.

Once she completes a cell, she then creates a partition, usually of chewed plant pith or sawdust, to close the cell, and create the bottom of the next cell. These partitions can be very thick, over 25 millimeters in some cases, perhaps the better to discourage parasites from digging through. She thus fills the tunnel from bottom to top, with as many cells as it will acoomodate. In situations where a twig is wide enough, some Pemphredon species will create branching tunnels instead of a single linear one. 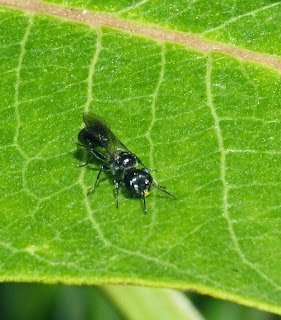 Sometimes, the female wasp will guard the front of her completed nest to chase off potential parasites or competitors. Small carpenter bees (Ceratina spp.), compete for the same pithy-twig nesting sites as Pemphredon, and are not above destroying the wasp's nest to create their own living space.

You can create housing for aphid wasps simply by drilling small diameter holes in a block of wood and hanging it off the ground under a protected place, like the eave of a garden shed. There are also ready-made lodges sold commercially for solitary bees that can be modified to suit the wasps, too. 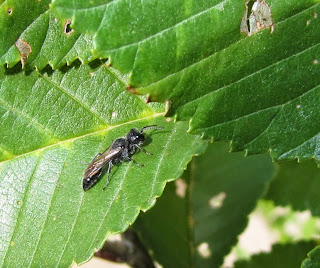