One of the most eye-catching and mysterious wasps in North America has to be the American Pelecinid, Pelecinus polyturator. It is so strange that it is placed in its own family, the Pelecinidae. Furthermore, only the females are commonly seen, leading to speculation that at least temperate climate populations reproduce without males. 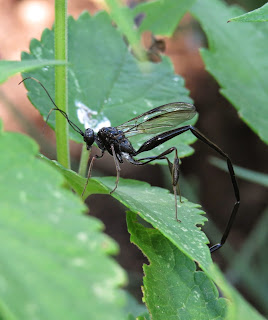 I was fortunate enough to encounter live specimens recently, on August 3, at Hudson Gardens in Littleton, Colorado (Arapahoe County). Several had been spotted earlier in the week by nature photographer Alison Kondler, who posted one of her images on the Facebook group page "Arthropods Colorado." The gardens are heavily landscaped, but sit adjacent to the South Platte River. Perhaps the riparian corridor offers the right habitat, or the gardens themselves make for a unique and hospitable ecosystem for this wasp. 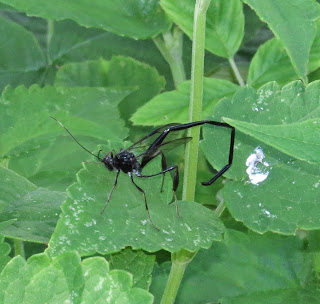 There is only the one species known north of Mexico, though there are two others ranging south of the border. Females are hard to miss. They measure 51-62 millimeters in body length, the overwhelming majority of which is the abdomen. Perhaps a better common name for this insect would be "snake-tailed wasp," or "American long-a** wasp." The wasp is wholly glossy black in color. The tibia segment on the hind leg is swollen , giving the wasp the appearance of wearing bell-bottoms. 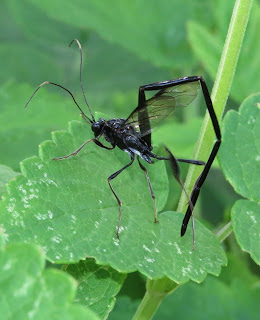 The single female specimen I observed alighted on a leaf in a shady area and began grooming herself. She would have been the envy of a contortionist, and I wish now I had recorded some video of her gymastics. Insects in general tend to be fastidious groomers, as it is essential to keep their senses sharp, wings aerodynamically sound, and their bodies free of parasites and hitchhikers. Her body plan presents quite the challenge, though, and she had to fold her abdomen in a manner whereby she could rub it with her hind legs. 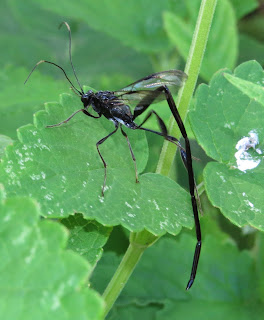 Before I saw this female, Alison alerted me to a slender black wasp she saw that was out of my view behind another plant. Imagine my shock to find that it was a male pelecinid! Males are exceedingly rare, or at the very least seldom seen. I managed this one shot (below) before he flew off. Male pelecinids measure only 12-25 millimeters, owing to their much shorter abdomen. They are glossy black like females, and also sport the inflated hind tibiae, though that character is not quite as apparent as it is in females. Males historically account for only 4% of collection records for the specis north of Mexico, though there may be a collection bias in that the smaller males are more easily overlooked, or mistaken for ichneumon wasps. 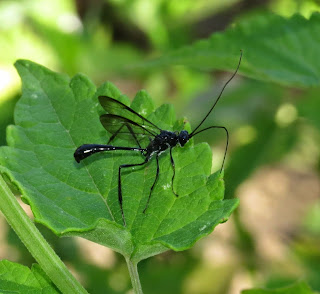 Pelecinus polyturator does not sting. The female uses her long abdomen to penetrate the soil and probe for subterranean scarab beetle grubs. She will lay a single egg on a beetle grub she encounters. Larvae in the genus Phyllophaga ("May Beetles") are the only known hosts. The grubs move vertically in the soil during the year, and are closest to the surface when pelecinids are active, making them perhaps a little easier for the wasps to locate. I can find no information, in a cursory search, as to whether the wasp larva is an internal or external parasite, nor how long the life cycle takes.

Parthenogenesis, the ability to reproduce without fertilization of eggs by male sperm, is not uncommon in some insects; but, thelytoky, the development of a female from an unfertilized egg, is rather rare in Hymenoptera (bees, wasps, ants). Normally, an unfertilized egg yields a male, due to "halplodiploidy," a phenomenon I still cannot wrap my own head around. 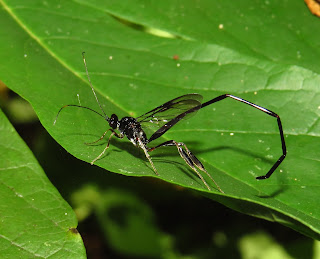 This specimen is from Baker Wetlands near Lawrence, Kansas

You are likely to encounter the American Pelecinid anywhere east of the Rocky Mountains, from southern Canada through the southwest U.S. and all the way to Argentina. In South America, this species has several color and size variations, suggesting more than one species is actually involved.

The adult wasps are most common during the month of August, though they can turn up in July, too. A few persist into September or, rarely, October. Look in the understory of hardwood forests, along woodland edges, and even in city parks.