Spider wasps in the family Pompilidae are fearless hunters of arachnids as small as jumping spiders and as large as tarantulas (the "tarantula hawk" wasps), but I was unfamiliar with any species of pompilid going after cobweb weavers in the family Theridiidae. That was until late last week when these stunning images came across my Facebook news feed.

Abel González snapped these images of a female Agenioideus nigricornis spider wasp carting a paralyzed Redback Spider, Latrodectus hasselti, back to a nest burrow in Oldbury, Western Australia. The significance of this behavior requires a bit of backstory. 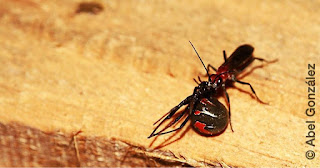 The Redback Spider is one of the most dangerously venomous arachnids in Australia. Indeed, it is in the same genus as the widow spiders of North America: Latrodectus. Any organism that targets such a potentially lethal animal deserves some acclaim. Oddly, we have species of the wasp genus Agenioideus here in the U.S. as well. I witnessed a female A. humilis hauling a comatose orb weaver here in Colorado Springs last year, and even posted about it, complete with video, in this blog entry. Our New World species do not go after cobweb weavers, let alone widows. 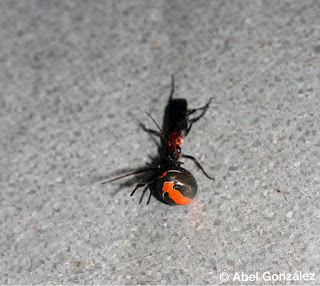 The initial discovery of the relationship between the Australian A. nigricornis and the Redback Spider is credited to a nine year-old boy, who spotted a wasp dragging a spider in his backyard in Beaconsfield, Western Australia. The young lad pointed out the drama to his father, who was astute enough to collect the two animals and photograph the habitat. The specimens eventually crossed the desk of Andy Austin, a professor at the University of Adelaide, who identified them.

This is not a big wasp. Females are only 8.24-13.11 millimeters in body length. Perhaps their diminutive size helps them navigate the labyrinth that is a Redback Spider's web. It is apparently still a mystery how the wasp manages to subdue its prey to begin with. 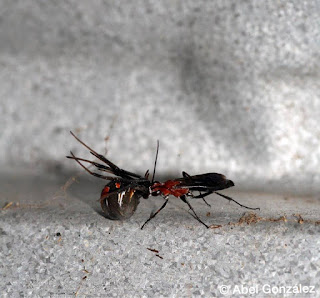 Back here in the U.S., the only spider wasp thought to be a potential predator of widows is Tastiotenia festiva, based on one circumstantial record from Rodeo, New Mexico. The range of T. festiva is restricted to the extreme southwestern U.S. One other wasp is very well known as a predator of widows. It is the Blue Mud Dauber, Chalybion californicum, a very widespread member of the family Sphecidae.

The Australian wasp was known to science as far back as 1775, when it was first described from specimens collected by Captain James Cook in 1768; and it is a common insect found throughout Australia. The fact that its host was unknown until the 21st century speaks to how much we have yet to learn about even the most familiar of invertebrates. 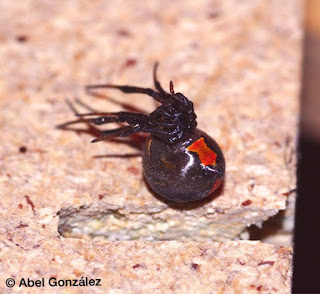