Around the holidays, we humans tend to pack on the pounds as we indulge in feasts and parties at Thanksgiving and Christmas. Wasps do not have this problem. One family of wasps in particular manages to stay super-slim and slender: the Gasteruptiidae or “carrot wasps.” 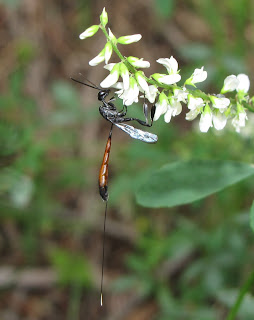 There are at least fifteen species of carrot wasps in North America, all in the genus Gasteruption. Five of those occur in the eastern U.S. and Canada. At first glance, they might be mistaken for ichneumon wasps, or even sphecid wasps in the genus Ammophila. This is probably not coincidental, since carrot wasps do not sting, but could benefit by looking like other wasps that can sting.

You can easily identify carrot wasps by the following characters:

Species identification often hinges on the texture of various parts of the thorax; and to a lesser degree on color pattern. 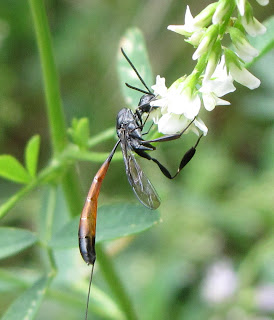 These are not terribly large insects, from 13-40 millimeters depending on the species, and much of that length owing to the long ovipositor in females. They are so skinny they remind one of a flying needle. 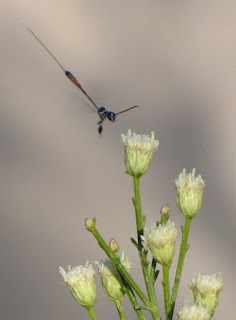 The adult wasps are most often encountered at flowers, especially those umbelliferous blooms in the parsley family, hence their common name of “carrot wasps.” I have also seen them at White Sweet Clover (Melilotus alba) and Desert Broom (Baccharis sarothroides), and Leafy Spurge (Euphorbia esula). Flight activity seems to peak in late spring (latter half of May) and/or mid-summer (July). 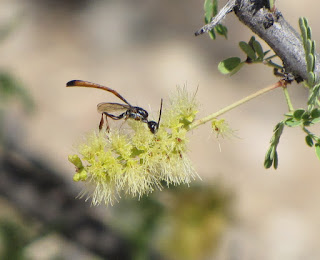 The biology of gasteruptiids is rather poorly known, but so far our North American species appear to be parasites of solitary bees and wasps that nest in twigs or borings in wood. The female wasp needs her long ovipositor to reach the depths of a host’s tunnel and deposit an egg. The larval carrot wasp that hatches usually feeds on the pollen, nectar, or prey stored as food for the host larva, rather than the host larva itself.

Trap-nesting for solitary bees and wasps could easily reveal many more host records for Gasteruption wasps, if one keeps careful notes. 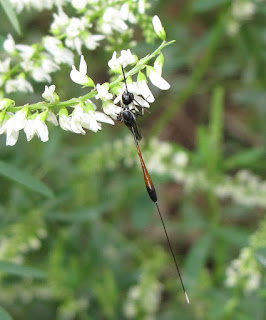