Sorry, in the wake of the popular mania over Tim Tebow, quarterback of the Denver Broncos NFL team, I could not resist the play on words. The spiders of the genus Ebo, members of the “running crab spider” family Philodromidae, are not known for their ability to score touchdowns or inspire a nation. That does not make them any less interesting as a topic of conversation, though. 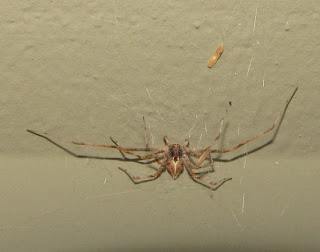 Philodromids are identified rather easily by the fact that their second pair of legs is longest. The genus Ebo takes this to an extreme, as that second leg is at least twice as long as all the others. Their “wingspan” must be the greatest for their size of any spider in North America. Their body size is small, averaging between two and six millimeters depending on the species, and skewing towards the lower end of that spectrum.

There were 22 recognized species of Ebo found in North America, but some species have recently been reassigned to the genus Titanebo, leaving just seven North American species in Ebo sensu stricto. Their collective distribution is throughout the U.S. and extreme southern Canada. Other species occur in Mexico, Argentina, India, and Russia. They reach their greatest diversity in the southwest U.S., which is where I found the specimen shown in the images below. It was on the edge of the bathtub in my Tucson, Arizona apartment. I guess I cannot say for certain now whether this is an Ebo or Titanebo. 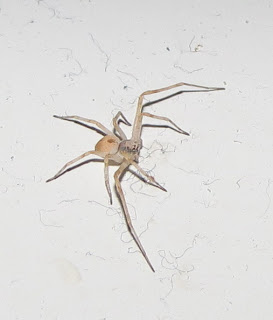 I originally posted these images on Bugguide.net, a bit reluctantly since they also showed a fair amount of lint on the bathtub. Fellow contributor Carol Davis put me immediately at ease with her own comment: “Cleanliness leads to buglessness and then what have you got? No photos!” Fair point, and I replied that I am not a messy housekeeper, I’m promoting biodiversity!

What about the origin of the name, you ask? Well, the German arachnologist Eugen von Keyserling who created the genus gives no indication of its derivation. Ebo was apparently a common name in medieval Germany, a diminutive of “Ebur,” meaning “prince” or “lord.” Hm-m-m, seems that both Ebo and Tebow could qualify for that definition.

Do keep an eye out for these unique spiders, which should be easy to recognize. You could say that Ebo is all elbows. 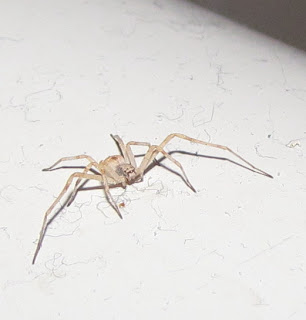