Few insects, unfortunately, have common names in the English language. That creates an obstacle for the general public to realize just how diverse and amazing the animal kingdom truly is. Among these overlooked organisms are tiny wasps in the family Diapriidae. I was not even familiar with them myself until I ran across numerous specimens while sorting pitfall and emergence trap samples for the University of Massachusetts back in 2009. 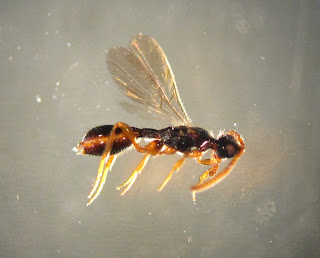 Were I to name them, I would call them “shelf-faced wasps.” Well, it fits! The most prominent feature of these insects is a ledge-like extension of the face just above the clypeus (“upper lip,” if you will), from which the antennae originate. Not all diapriids have this feature, but most of our more than 300 North American species do.

Averaging only 2-4 millimeters in length (they range from one to eight millimeters), it helps to put them under a microscope to see the details of their external anatomy. Besides the face, note that there is minimal wing venation, if any at all. The abdomen is petiolate, and the body is generally smooth and polished. 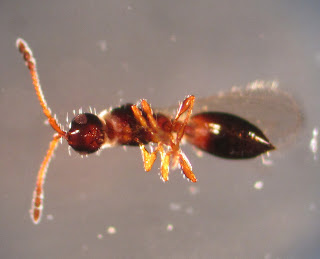 Little is known about these parasitic wasps in part because they do not impact important agricultural pests. Instead, most known species have a life cycle involving parasitism of the larvae and/or pupae of various flies (order Diptera). Fungus gnats (families Mycetophilidae and Sciaridae) are among common hosts. The larva of the diapriid feeds internally on the maggot. While most are probably solitary parasites, at least a few species are gregarious, several larvae feeding inside one host.

Diapriids are most common in moist woodland habitats where they stalk their hosts around fungi, leaf litter, and damp soil. Some genera in occupy extreme habitats such as intertidal zones. There are at least two records from the Old World tropics suggesting that some specialized genera in the subfamily Diapriinae are parasitic on the larvae of certain ants. 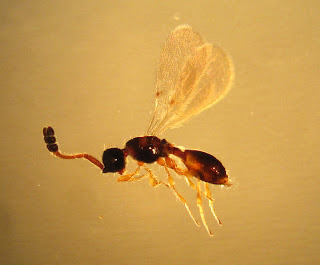 The great majority of diapriid species are awaiting formal description by scientists. Worldwide, there are 2,300 described species in 150 genera. Entomologists estimate there are at least 4,500 species. There are few resources for identifying species outside of Europe.

I urge my fellow naturalists to try various trapping techniques to see what wonders they might find in their own yard, garden, or nearby park. Invest in a good microscope, too. You will be surprised at the animals you will find. 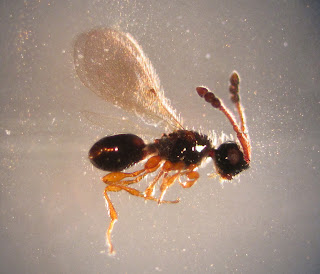