Not all enemies of spiders kill them. Some will steal a meal. Others aren’t really enemies, but escape their own enemies by hiding out on spider webs.

While in Massachusetts, I was lucky enough to witness a common scorpionfly, Panorpa acuta, scavenging prey in the web of a sheetweb-weaver (family Linyphiidae). The spider tried to chase off the pesky mecopteran, as evidenced by the image below. 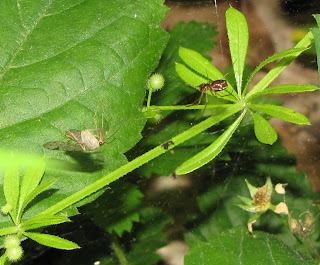 Common scorpionflies are in the family Panorpidae, order Mecoptera. They are named for the enlarged claspers of the male, part of his external genitalia. They are so large that the male must curl the end of his abdomen, giving him the appearance of a scorpion. The “long face,” terminating in chewing mandibles, also helps to identify these insects. 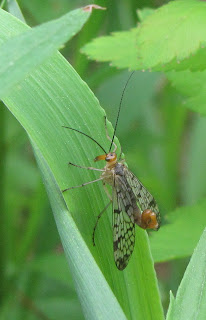 They go through complete metamorphosis, the larvae living in soil and leaf litter on the forest floor where they also scavenge on dead or dying, soft-bodied insects. They go through four instars (the intervals between molts), before pupating in an earthen chamber in the soil.

Another phenomenon I saw in Massachusetts was the use of spider webs as roosting places for a certain species of gall midge, family Cecidomyiidae. Gall midges are a type of fly. Whereas most flies become tangled in spider webs and eventually a meal for the spider, these tiny flies are able to select the non-sticky foundation threads of spider webs and safely suspend themselves from them. Predators of the flies, if they even managed to notice them, would risk becoming tangled in the spider web should they attempt to catch one of the diminutive midges. 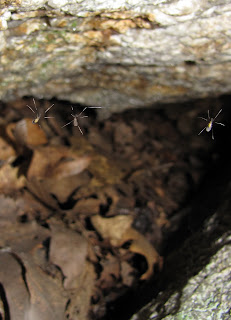 This trapeze act is apparently a widespread phenomenon in the Cecidomyiidae, especially in the subfamilies Porricondylinae and Cecidomyiinae. The behavior was first reported (published) in 1853 by Johannes Winnertz. 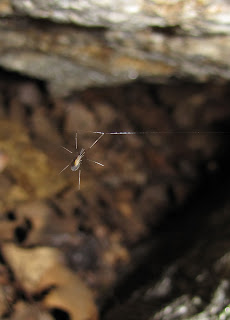