Many bees are easily mistaken for small wasps, especially the “masked bees” of the genus Hylaeus in the family Colletidae. There are not many characters that can be used to separate these bees from wasps that are easily visible in the field. Mostly it just takes a practiced eye to tell them apart. 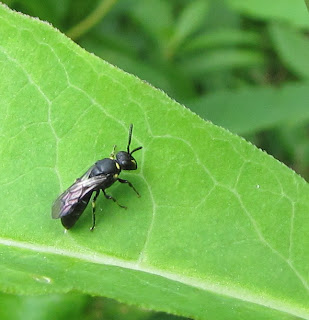 Masked bees, also known as yellow-faced bees, are nearly hairless, accentuating their resemblance to wasps. While wasps have hairs, too, those hairs are simple and unbranched. The hairs of bees, in contrast, are plumose and almost feather-like. Unfortunately, this character requires a minimum magnification of sixty power to observe. Live bees and wasps don’t usually cooperate for microscopic examination.

Hylaeus are not parasitic on other bees, so a logical question would be how does a hairless bee transport pollen and nectar back to its nest? The answer is that the female bee ingests mostly nectar, and stores it in a special internal organ called the “crop.” Once the bee arrives back at the nest, she regurgitates her load and stores it in a cell. Several such loads will provide enough nourishment for the single larval offspring in each cell.

Masked bees are solitary, meaning each female makes her own nest. Without strong jaws, or a rake of spines on the front legs, Hylaeus bees are pretty much forced to use pre-existing burrows of other insects in the soil, cavities in the pith of twigs, or in abandoned galls. Indeed, most species of Hylaeus nest in hollow stems or twigs. Individual cells are lined with a natural plastic, a type of polymer secreted by glands in the female’s abdomen. 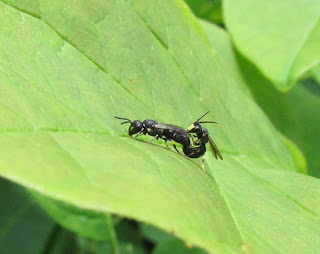 Male and female masked bees can be distinguished by their facial markings. Females generally have yellow, white, or ivory markings on the inner margin of each eye. Males have the entire face colored yellow or white. 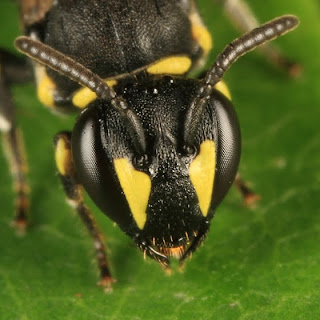 Photo by Tom Murray via Bugguide.net

There are around 900 species of Hylaeus, collectively distributed worldwide, with about fifty in North America. The genus reaches its zenith of diversity in subtropical Australia, and the Hawaiian Islands. There are, or were, sixty species in Hawaii. Several of those are threatened or endangered, in part by invasive ant species that have been introduced from elsewhere and prey on the bee eggs, larvae, and pupae. Seven species of Hylaeus are considered “critically imperiled and possibly extinct,” according to the Xerces Society. 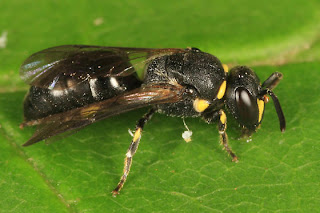 Photo by Tom Murray via Bugguide.net

Because the female bees collect so little pollen, it has been problematic to determine which species are generalist pollinators, and which are specialists. Recording which flowers the females visit has only provided a little insight. Analysis of pollen grains in the larval feces of three species in Michigan revealed that pollen foraging skews toward members of the Rosaceae when those flowers are available, and Asteraceae otherwise (Scott, 1996). The western U.S. species H. bisinuatus apparently visits White Sweetclover, Melilotus alba exclusively, even when other flowers are available. The Australian species H. alcyoneus visits only Banksia flowers. Still, the vast majority of species are assumed to be generalist pollinators.

Masked bees will readily nest in artificial bee boxes, be they bundles of thin straws, sumac twigs, or blocks with small diameter holes drilled into them. Consider constructing one of these and hanging it on a south-facing exterior wall, tree trunk, or similar situation. Be sure to include a “roof” to protect the entrance holes from rain, and elevate it at least three feet from the ground. Many websites exist with further hints on how to build such nest boxes. 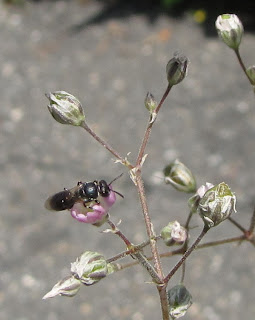 Lastly, don’t fret if you can’t always tell the difference between masked bees and wasps. There are records whereby species of Hyleaus were originally described as wasps by scientists.