Most species of insects are smaller than you would imagine. This is also true of wasps. For every species you notice, there are dozens you don’t. One common species that is easily overlooked is Clitemnestra bipunctata in the family Crabronidae. 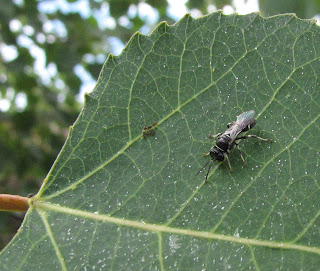 At about 5-6 millimeters in body length, this wasp usually escapes notice. I have found them most commonly around aphid colonies where they lap up the aphids’ liquid waste, known as “honeydew.” The species ranges across most of the United States and is also recorded from Cuba. 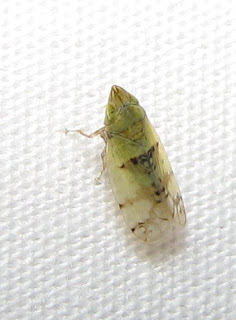 Nests are burrows usually dug in bare soil near the top of vertical banks, and to a depth of 9-20 centimeters. One to three cells usually branch from the main tunnel. Each cell measures about six by ten millimeters, and the wasp stores 6-18 paralyzed prey per cell.

The satellite flies Phrosinella aurifacies and Metopia argyrocephala are reported as parasites of nests. The adult female flies enter the burrows and deposit live larvae inside. The larvae feed on the paralyzed prey, but often destroy the wasp egg or larvae as well. Adults of Climnestra bipunctata are preyed on by adults of the robber fly Diogmites angustipennis, and probably other predatory insects as well. 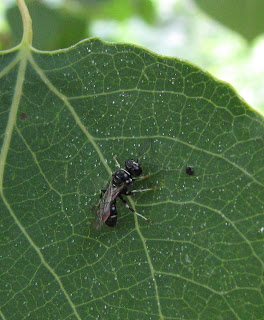 Note that this species was formerly known as Ochleroptera bipunctata, but that genus was merged with Clitemnestra by Bohart in 2000.