Few arachnologists would argue that the most charismatic of spiders are the jumping spiders, family Salticidae. These agile hunters are about as “cute” as spiders can get. They have surprisingly acute vision, and will turn to look at you with one pair of enormous eyes when you approach them. Jumping spiders can also be very colorful. Few species are immediately recognizable, however, due to their great variability in color and pattern, and their generally small size. One species that is fairly identifiable is the Gray Wall Jumper, Menemerus bivittatus. 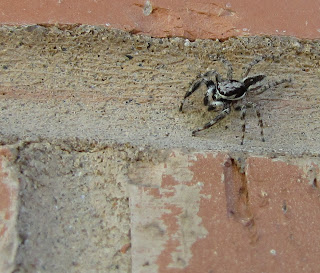 I was fortunate to encounter several pairs of this species living up to its common name on the exterior walls of the visitor center at Bentsen-Rio Grande Valley State Park in Mission, Texas in June, 2010. The Gray Wall Jumper is not native to North America, however, having been introduced from the Old World tropics. Here in the U.S. it is generally confined to Florida, Texas, and southern California. 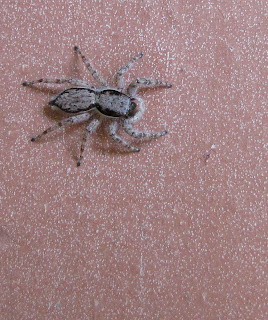 Jumping spiders, and hunting spiders in general, differ from web-building spiders in that both genders are nearly identical in size. Female Gray Wall Jumpers (image above) are 8-10 millimeters in body length at maturity, whereas males (images at top and below) are 8-9 millimeters. The striking differences are in their color pattern. The male has more or less a reverse color pattern from the female, at least on the abdomen. I initially thought I had taken images of two different species. 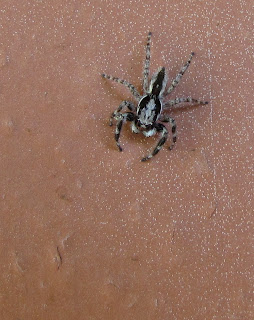 A flat, vertical surface seems an odd “habitat” for any organism, but Menemerus makes the most of it. The spiders actively stalk small flies that bask in such situations, or that are attracted to lights at night. They are strong enough to bring down fairly large crane flies, and subdue something the size of a house fly, too.

One can’t help but become enamored with these spiders, especially after seeing them in action. This video gives you just a glimpse of their behavior. See if you can identify the males and females in that clip.

The female spider constructs a lens-shaped egg sac to hold 25-40 eggs. She guards the sac inside a silken retreat that is about 1.5 centimeters in diameter. She’ll also protect the spiderlings after they emerge, for a total of roughly three weeks from egg-laying to dispersal of her offspring.

In places where their respective ranges overlap (Texas), the Gray Wall Jumper may be mistaken for the species Platycryptus undatus, shown below, or vice versa. Both are likely to be encountered on vertical surfaces such as outside walls, and they are very similar in size and markings. Platycryptus is native, however, and has a much more extensive range, extending far to the north into southern Canada. 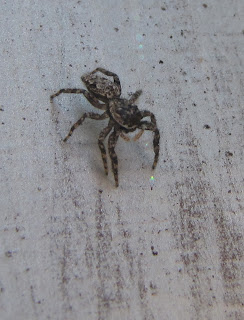 Be sure to look for the Gray Wall Jumping Spider in your travels abroad, too. It is essentially cosmopolitan in tropical and subtropical regions throughout the world, including Japan, India, Thailand, Paraguay, and even the Galapagos Islands.