When one thinks of giant spiders in the southwest U.S., tarantulas come immediately to mind. There is one other spider, however, in an unrelated family, that rivals tarantulas in size. Olios giganteus is a member of the family Sparassidae, collectively known as “giant crab spiders,” or “huntsman” spiders. These are tropical and subtropical spiders, but some species occasionally turn up in temperate climates, imported with bananas or other tropical fruits. 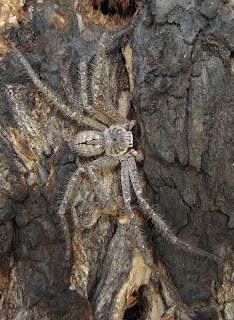 Giant crab spiders, like spiders in the families Thomisidae, Philodromidae (see Ebo from last week’s “Spider Sunday”), and Selenopidae, have laterigrade legs. This means the legs are “twisted” at the base such that they are oriented in the horizontal plane, rather than the vertical axis. This allows these flat-bodied spiders to scuttle into very narrow cracks or crevices. Giant crab spiders take full advantage of this to slip underneath loose bark, or into an opening in the siding on your home. Indeed, you are most often apt to encounter these spiders on vertical surfaces. 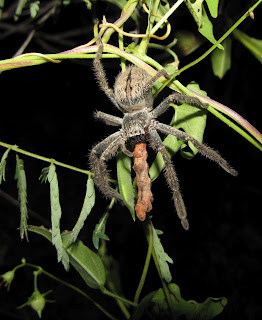 Paired claws at the tip of each leg, with a tuft of special hairs between them, allow the spider to easily navigate surfaces with the least bit of texture, or scramble effortlessly over slender twigs in pursuit of prey. Hiding by day they emerge at night to hunt. I was surprised to find them on a night hike in Florida Canyon in the Santa Rita Mountains of Arizona, so accustomed had I become to seeing them on the exterior walls of buildings. 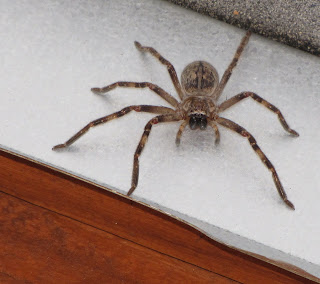 They do sometimes stray indoors, and apparently such incidents once inspired newspaper publicity for the “barking spider” in some small towns in west Texas (Gertsch, 1979).

Olios giganteus is just that: a giant. Mature males measure 11.3-29.4 mm (average 25), but females can be 14.6 to a whopping 48 millimeters (average 31.6) in body length. The eight sprawling legs make these arachnids look larger still. In reality, their legspan is “only” 50-64 millimeters.

Little is known about the life cycle of Olios huntsman spiders. Normally nomadic, females do settle down when it comes time to lay eggs. They weave a large bag-like retreat within which they spin an egg sac. They guard the precious pouch and the spiderlings that eventually emerge, not feeding themselves during the incubation period, about one month in mid-late summer (Jennings, 1981). 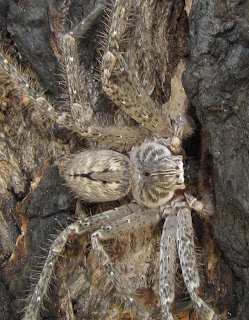