There are few terrestrial invertebrate animals that can change color at will, but females of the Goldenrod Crab Spider, Misumena vatia, are among them. This chameleon-like quality is just one fascinating aspect of the life of this amazing arachnid.

I should say that while the spiders can turn from white to yellow, or vice versa, this transformation is not instantaneous. It takes from one to twenty days to achieve. The result is quite miraculous in that the spider will end up virtually indistinguishable from the flower upon which it sits. Many a time I have watched one of these spiders materialize from blossoms right before my eyes. 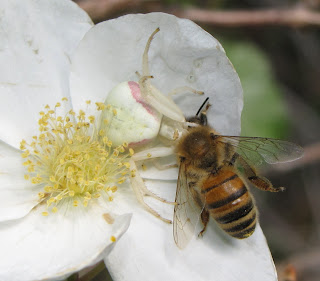 This flower disguise helps these patient ambush hunters to capture prey consistently. The females need to be efficient because their lifespan is relatively short and they need to produce a good clutch of eggs to ensure a future generation. A female puts on about 85% of her body weight after she matures. Her eggs account for most of that mass, of course.

Despite the fact that spiders have an exoskeleton, the cuticle is incredibly elastic. Her abdomen can easily expand to accommodate a large meal and/or her developing ova.

The flower crab spider is small but mighty. Adult females measure 6-11 millimeters in body length, but their strength exceeds what you would expect. Misumena is capable of taking down some impressive, well-defended prey like the honeybee in the above image. I actually found the spider by noticing the awkward posture of the honeybee first. The Boulder Raspberry blossoms were certainly getting a lot of attention from pollinators, so the spider picked a prime hunting ground (on Cheyenne Mountain near Colorado Springs, Colorado). 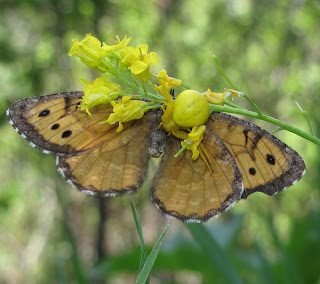 Even more stunning, I came across another specimen, this time in yellow phase on a Golden Banner flower, that had seized a large Chryxus Arctic butterfly (Teller County, Colorado at an elevation of over 8,000 feet). Arctic butterflies never rest with their wings open, so I knew something was up…. 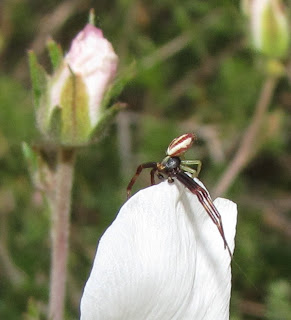 The males of Misumena vatia are certifiable wimps compared to their mates. The masculine gender measures a mere 2.5-4 millimeters at maturity. He is skinny and leggy compared to the voluptuous female, and he has an entirely different color pattern. Not strong enough to secure large meals, he may even settle for eating flower pollen. He matures faster than the female, and as an adult will wander constantly in search of prospective mates. 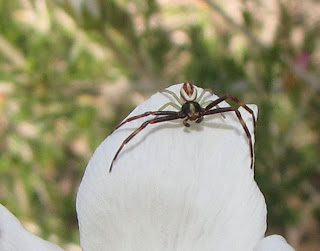 Mated females eventually produce an egg sac that is usually wrapped in a folded leaf. She guards her brood religiously and will not feed until the spiderlings emerge and disperse. Note the gaunt appearance of the female below, standing guard over her bundle of eggs. The “pleats” on her abdomen reflect the elastic nature of her exoskeleton. 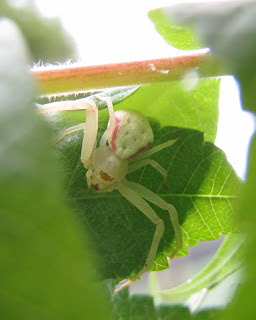 Misumena vatia is a member of the crab spider family Thomisidae; it is a common and widespread species ranging across the entire northern hemisphere including North America, Eurasia, and northern Africa. Female spiders may be yellow or white, with or without rosy stripes on their flanks. It takes a sharp eye to spot them, but I can just about guarantee you have some in your neighborhood somewhere.

Want to know more? Almost every aspect of the natural history of this species has been studied in detail, a fact reflected in the numerous scientific papers generated over the decades. An entire book has even been written about it: Predator Upon a Flower: Life History and Fitness in a Crab Spider, by Douglass Morse (Harvard University Press, 2007). You will also find a more succinct yet still captivating summary at Spiders.us, courtesy of Mandy Howe’s diligent research.