Life is literally a beach for the Beach Wolf Spider, Arctosa littoralis. This member of the family Lycosidae ranges throughout the United States and southern Canada, so obviously not all individuals live by the seaside. However, this spider is partial to sandy habitats such as dunes, stream banks, and blowouts. 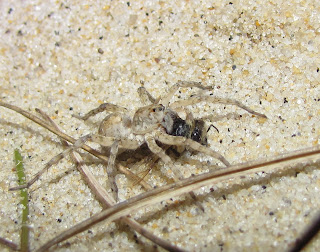 The specimen shown here is one I encountered in Massachusetts on Cape Cod National Seashore under cover of darkness on July 25, 2009. It had killed what was probably an already weak worker honeybee. This worked to my advantage because the arachnid was not racing across the sand, outrunning me, my light source, and camera.

Arctosa littoralis is a fair-sized spider, mature males and females measuring 11-15 millimeters in body length. Their sprawling legspan adds to their perceived size. Still, good luck spotting one if it isn’t moving. The camouflage of this species is amazingly effective. Mottled gray, brown, or nearly white, it blends in with the sandy substrate upon which it hunts.

It may help to look for them at night. Arm yourself with a good headlamp or flashlight, held at the same level as your eyes. When the beam of light hits a wolf spider, the animal’s eyes will glint with a bluish-green shine. This technique works on other wolf spiders, too, and a female with young on her back looks like a diamond-studded stone. You will be surprised at just how populous lycosids are if you ever try this. I tried it on a lawn in south Texas once. I thought the grass was covered in dew. No, just wolf spiders!

Should you opt to seek the Beach Wolf Spider by day, try turning over driftwood and other debris on the shore. The spiders hide in such situations by day; they may also dig burrows in the sand, so look for that as well.

Despite being a swift, muscular hunter with excellent vision, Arctosa littoralis is not immune from its own predators. Several species of spider wasps in the family Pompilidae are recorded as using the Beach Wolf Spider as food for their larval offspring. Priocnemis cornica, Ageniella conflicta, and Anoplius apiculatus are among the pompilids that prey on Arctosa littoralis.

Summer is here, and vacation time is upon us. Consider looking for the Beach Wolf Spider and other seashore invertebrates during your next leisure trip to the beach. Don’t forget to pack your sunscreen and shades, though.