Last Sunday was Mothers’ Day, but if you will forgive me I would like to pay tribute to arachnid mothers today. During my trip to South Carolina in early May, I had the occasion to momentarily observe a large female wolf spider of the genus Hogna on the afternoon of May 6, 2012. She had an egg sac and was living in a burrow on a wooded embankment adjacent to a road. I had stopped along with members of the Dragonfly Society of the Americas to look around a stream for dragonflies and damselflies. Descending the steep slope to get to the watercourse, another member of the party spotted the spider. 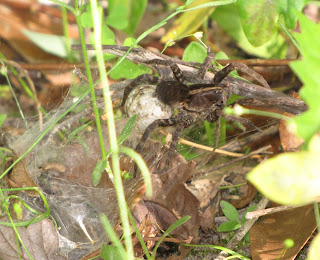 The arachnid was out of her burrow and standing on a network of threads just outside its entrance. The footfalls of others caused her to dash back into her refuge and I thought I’d seen the last of her.

I waited patiently next to her lair and was surprised when she returned to the lip of the burrow shortly. I was hoping she would climb back out for more photo opportunities, but instead she did something remarkable. She turned around inside her burrow and backed out to the entrance. 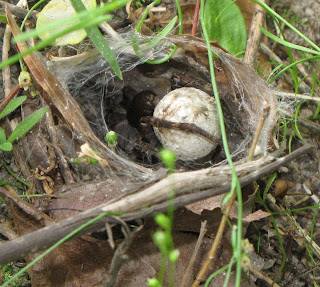 Why would a large wolf spider, with quite excellent vision, and perfectly capable of defending herself with her fangs, choose to present her vulnerable abdomen, and the egg cocoon attached to it, to potential lurking enemies? The only logical explanation that came to mind was that she was sunning her egg sac.

Indeed, there was filtered sunlight streaming through the forest canopy in the late afternoon: not too intense as to cook the ova within her silken package, but warm enough to help incubate the eggs. Still, had she not repeated this behavior, turning around at one point to make sure no threat was present and then backing out again, I’m not sure I would have believed what I was seeing.

It turns out this kind of behavior is not unheard of in other wolf spiders. Studies of Pardosa wolf spiders of two species revealed that at least one of them seeks open areas in which to expose the egg sacs to the sun (Buddle, 2000).

Had I been able to return to the site day in and day out, I would have eventually witnessed the mother spider cracking open her egg sac, allowing the newly-hatched spiderlings to emerge. Wolf spider babies crawl from the egg sac onto their mother’s back, completely covering her abdomen and sometimes much of her cephalothorax as well. She will transport the youngsters until their next molt, after which they disperse to live freely on their own.

Such devoted parental care is considered uncommon among spiders, but the more we learn the more the picture changes. There are even some female spiders that die immediately after their spiderlings hatch, offering their bodies as their offspring’s first meal. 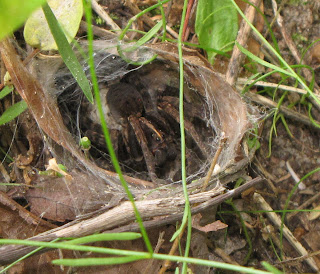 A piece of long-standing advice is to “stop and smell the roses,” but it also pays to stop and observe animals, too. Science knows very little of the lives of most organisms that are not economically important, be they food sources or pests. Who knows what could come from your own casual observations of the insects, spiders, and other wildlife that share your yard, garden, and neighborhood park?