Finally! I have been looking for an adult Elm Sawfly, Cimbex americana, for decades, ever since seeing pinned specimens in college back in the early 1980s. My quest ended this past Monday, June 25, when I happened upon a huge male specimen in the middle of a meadow in Emerald Valley, Colorado. 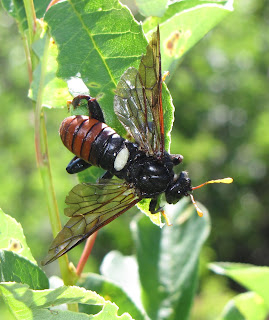 The Elm Sawfly is a large, robust insect about 20-25 millimeters in body length. They appear even bigger, especially the males with their beefy “thighs” (femora) on the middle and hind legs. The jaws of both genders are strong, and used to strip bark from twigs, sometimes girdling them in their efforts to reach the tasty sap. The clubbed, relatively short antennae are a characteristic of all members of the family Cimbicidae. The overall plump appearance often convinces people that these insects are bees rather than wasps.

The larvae of these wasps feed not on pollen, nectar, or other insects paralyzed and provided by their mothers. Instead, sawfly larvae feed on plant foliage. Despite the name “Elm Sawfly,” Cimbex americana feeds on other trees as well, especially willow, but occasionally on basswood (linden), birch, poplar, alder, and maple. At maturity, the caterpillar-like larva can be two inches (43 millimeters or so) long. 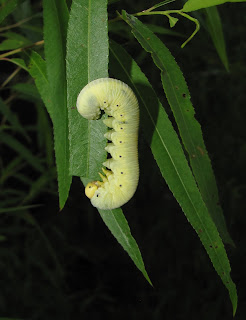 When they are disturbed, Elm Sawfly larvae coil themselves and prepare to release volatile chemicals from glands in the thorax if necessary for their self-defense. They also rest in a coiled position. The rough, pebbly texture, and black midline dorsal stripe help to identify these greenish, yellowish, or whitish larvae. Look for them mostly between June and October, but note that I found the specimen pictured here on May 7 in South Carolina. 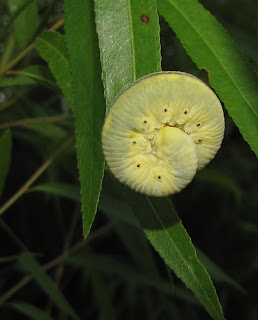 The mature larvae crawl to the ground and spin a tough, papery cocoon around themselves amid leaf litter or just below the surface of the soil. There they remain as larvae through the winter, pupating the following spring. There is only one generation per year.

The adults are sexually dimorphic in color. Shown here is a male. Females have the abdomen black with yellow horizontal bands interrupted in the middle. There is some variation in color and pattern from one geographic area to another. This is a very widespread insect, found in the U.S. and Canada from the Atlantic seaboard to the Rocky Mountains, and also the Pacific coast states north to Alaska.

Females of the Elm Sawfly use a saw-like ovipositor to insert eggs in the leaves of the host tree. They do not have a stinger. Both genders simply look intimidating. Males may defend territories. The one I found on Monday I startled from its perch, but after a wide orbit it flew right back to that one shrub, elevated only a little above surrounding vegetation.

The Elm Sawfly does have its enemies, including an egg parasite, Trichogramma minutum, a very tiny type of wasp. A large ichneumon wasp, Opheltes glaucopterus barberi, is an internal parasite of the sawfly larva. The sarcophagid fly Boettcheria cimbicis has been reared from the pupal cocoons of the Elm Sawfly.

See if you can find this species in your own region. Do you find it to be common? Do populations vary from year to year? While this species is rarely a pest (it has been known to defoliate shade elm trees, especially in the northern Midwest), it would pay to know more about it. 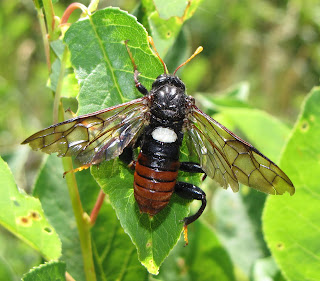