Last week I wrote about a single, blooming Saltcedar tree (Tamarix sp.) that was attracting a great diversity of insects, especially wasps. Well, after spending several more days at that (introduced, invasive) tree, I can add to the list significantly. 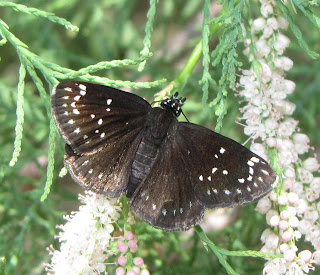 The following list of wasps will be the final one. I will amend it as I make more specific identifications, and/or add new species during future forays to the tree:

All of the above were found either on the tree or in very close proximity. Male wasps take advantage of the fact that females will seek nectar at an isolated shrub and then create territories around it which they defend from other males. I found this was especially true of Tachytes and Philanthus, but I observed other wasps (and flies, too), mating on or close to the tree.

I have put together a “set” of images on my Flickr photostream entitled “Wasp Tree” that illustratse more of these insects. It is an ever-growing set, so please visit often. Thank you.