When it comes to disposing of garbage, some spiders are neat freaks, while others let leftover meals and other trash accumulate in their webs. Black widows are slobs. At the other end of the spectrum are spiders that recycle their waste, incorporating it into their web architecture to help disguise their own presence. These are the “trashline orb weavers” in the genera Cyclosa (image below) and Allocyclosa. 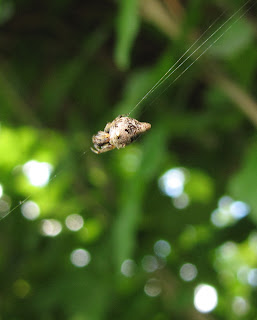 Don’t blame yourself if you have never seen one of these arachnids. They are quite cryptic, masquerading more or less as bird droppings in color and shape. They spin small, vertical orb webs (Cyclosa is Greek for “to move in a circle,” referring to the spiral nature of the round web), but the snares are relatively small, and the decorations help to make them even more inconspicuous. 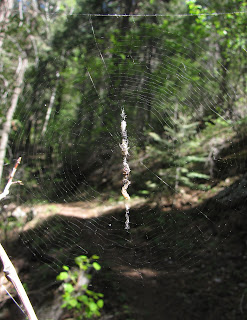 There are five species of Cyclosa in America north of Mexico, two of which are common and widespread. C. conica and C. turbinata both occur over the majority of the North American continent. They are difficult to separate, but females of turbinata have a pair of humps on the top of the abdomen. Females of C. conica are a bit larger and lack the bumps. Both species often have a conical or spatulate projection at the rear of the abdomen. This can be very pronounced, or hardly evident.

These are not very large spiders, even as adults. The body length of a mature female C. conica is only 5.3-7.5 millimeters. Males (image below) are only 3.6-4 millimeters. 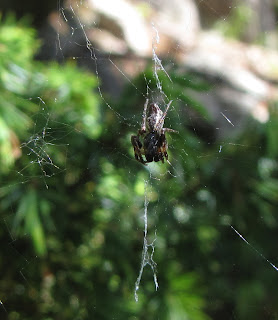 What makes these spiders truly unique is how they arrange old prey, newly-captured prey, and other debris vertically through the very middle of the web. The spider itself is squarely in the center (hub), but good luck finding it amid the clutter. All of the objects are about the same size and shape as the spider, too. A bird or other visual predator trying to find the spider would be hard-pressed to see it as well.

Look for the webs in open woodlands, and even in shrubs in gardens and yards, well off the ground. I see most of them at or near eye-level, in fact (I am 5’8” for reference).

These spiders reach adulthood in the spring. Mature males do not spin webs, wandering instead in search of potential mates. Mated females then create up to five egg sacs, hiding them on twigs or beneath foliage.

The only species of Allocyclosa found in the U.S. is A. bifurca. It ranges into southern Texas and Florida, building its web most commonly amid prickly pear cacti quite close to the ground. The name bifurca refers to the forked projection at the rear of the abdomen. The adult females are silvery or white in color, and measure 5.1-8.5 millimeters in body length.

Interestingly, you will see females almost exclusively. They arrange trash along the middle of their web, south of the hub where the spider sits. Above her, she arranges a string of egg sacs, each about the same size and color as herself. Can you spot the one in the image immediately below this paragraph? 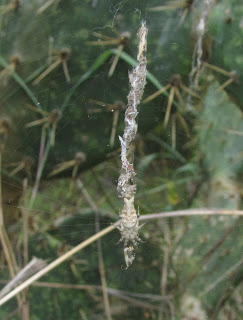 The rarity of males is perplexing, an unsolved arachnid mystery. The strangely vestigial external genitalia of the females, with no external opening, has lent some weight to the theory that the species is parthenogenic, a scientific term meaning the ability to reproduce without males.

Enjoy searching for these amazing spiders when you are out and about. Also, a wise word for all my gentleman readers: when your spouse asks you to take out the trash, do not take after trashline orb weavers and decorate the den with your disposables. I’m just sayin’…. 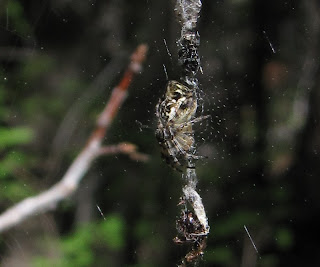