Ok, ok, I confess. I watch that awful Animal Planet show Infested! What is often more appalling than the crises faced by the people showcased in the program are the rampant errors and hyperbole provided by many of the “experts.” One recent episode, however, was probably not overly exaggerated. It featured a family whose rural Pennsylvania home was overrun with Brown Marmorated Stink Bugs, Hyalomorpha halys, that were seeking winter shelter.

I have written about this invasive species previously, in a feature on ”Common Indoor Insects of Autumn”, having never seen one in person. That changed last year when my wife and I visited Cape May, New Jersey. Many structures, from buildings to Port-O-Lets, were being investigated by the bugs as potential winter hang-outs. The insects were also common on foliage and vehicles. 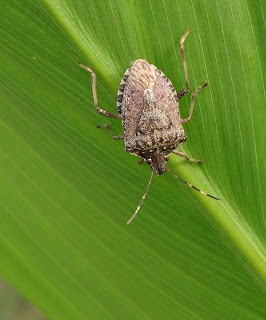 Since my first article, things have gotten even worse. H. halys is now found in most states east of the Mississippi River, plus the Pacific Coast states, and now Utah. Furthermore, it has elevated its status to that of a bonafide agricultural pest. In fact, it is essentially number one on the U.S. Department of Agriculture’s “most wanted” list.

The Brown Marmorated Stink Bug is what is called a “generalist” feeder, meaning that there are a wide variety of plants on its menu. Most insects are “host-specific,” unable to eat plants outside of one genus or family. The Monarch butterfly is a good example of a host-specific insect. The caterpillars can only eat the foliage of milkweed and closely-related plants. Contrast this picky diet with that of H. halys. Over 300 species of plants are palatable to it in the nymph and adult stages.

This versatility in host plants translates to a potent economic impact. The bug accounted for $37 million in losses to apple-growers alone in 2010. Other crops adversely affected include raspberries and blackberries; and organic farmers reported losses of beans, peppers, and tomatoes. The cosmetic damage alone can render some produce unsalable.

Like all true bugs, stink bugs feed on plant sap and juices through beak-like piercing-sucking mouthparts. Their sipping and sucking can cave-in corn kernels, wither fruits, and leave unsightly stains behind. 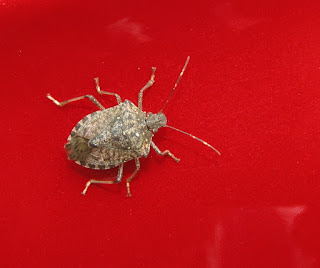 Adult male Brown Marmorated Stink Bugs also emit an “aggregation pheromone,” a kind of aromatic chemical cocktail that attracts other males, females, and nymphs to food sources. So, as if a single bug isn’t bad enough, he recruits friends and family. Scientists may be getting closer to using that pheromone as a weapon against the bug, by drawing them into traps, for example.

Back to that episode of Infested!. It had a happy ending. Initially demoralized by the overwhelming number of bugs holding them prisoner indoors and eventually infiltrating their home, the family turned the problem into profit. The father devised a light trap to attract and kill the bugs, and is now selling his invention to others.