Spiders can be very confusing to identify. There is a great deal of “convergent evolution” in appearance and behavior between very different genera, even families. I found myself momentarily wrong earlier this month when a lanky, striped spider wandered onto the sheet of our blacklight setup in a suburban neighborhood in Manhattan, Kansas. It was the first time I had seen a specimen of Pisaurina dubia, a type of nursery web spider in the family Pisauridae. 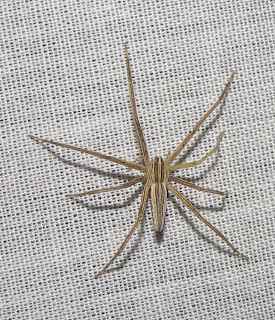 Most members of the Pisauridae are large or very large when mature, but those in the genus Pisaurina spend the winter as sub-adults, so they are slightly smaller in size in the spring. Consequently, I mistook this one for another kind of spider. This spider measured only about 12-15 millimeters in body length, so my initial identification was one of the slender crab spiders in the genus Tibellus, family Philodromidae. 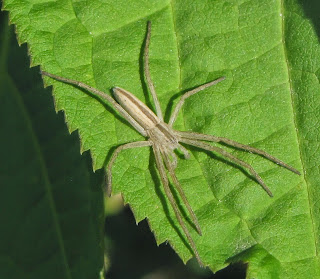 The “habitat” where the spider was prowling was a lawn, which is also rather atypical for nursery web spiders that favor much taller grass at the least, and usually shrubs and trees, too. Mature females construct “nursery webs” amid foliage at least a few inches off the ground where they suspend their egg sac just prior to the emergence of the spiderlings. Mom guards the youngsters until they molt again and disperse.

Turns out that a lawn is not foreign territory after all, at least not for this species. P. dubia also occurs in the litter and understory of woods, along forest edges, in barns on hay bales (well, one specimen anyway), and on the exterior of homes, sometimes straying indoors (Guarisco, 1994). This spider has even been found living in pitcher plants, climbing around on Spanish moss (actually a type of bromeliad), in sugarcane fields, and low vegetation in wetlands in the southeast U.S. 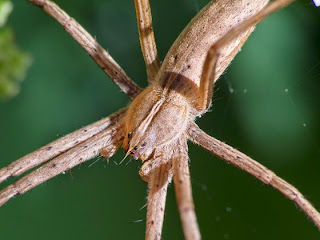 To my knowledge, this species has no common name, but I might suggest it be called the “Horned Nursery Web Spider” or “Tufted Nursery Web Spider.” One of the distinguishing features of Pisaurina dubia appears to be a central tuft of hair that usually projects from between the eyes at the front of the cephalothorax like a tiny horn (see image above).

This species ranges across the southern two-thirds of the eastern U.S. from New Jersey to Florida, and east to eastern Nebraska, Kansas, Oklahoma, and Texas. 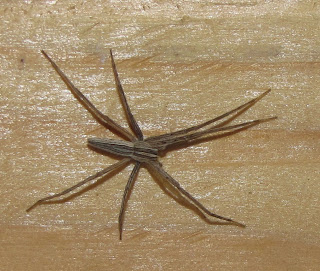