Last Monday, my wife and I went out to the Rocky Mountain Arsenal National Wildlife Refuge northeast of Denver. We were pleased to find a handful of specimens of the cute little “Zebra Jumper,” Salticus scenicus, family Salticidae. These wonderful jumping spiders should be abundant here, as they seem to be in most other parts of the U.S. and southern Canada, but we don’t seem to see many. 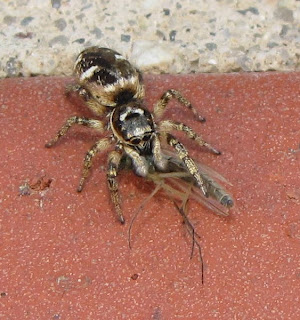 These are small spiders, adult females measuring only 4-7 millimeters in body length, males 4-6 millimeters, but their bold color pattern makes them relatively conspicuous anyway. They also like to prowl walls of buildings, fenceposts, and other vertical man-made objects. Indeed, they seem most common in urban and suburban settings where people are likely to notice them. 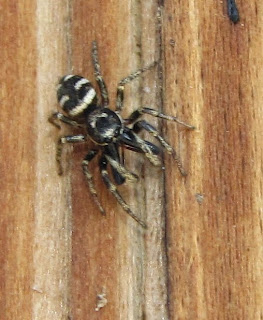 Adult males and females can be easily separated from each other. Females have a more mottled appearance, the black-and-white pattern broken by streaks of beige or tan. Males are almost exclusively black and white; and they have greatly elongated chelicerae (jaws) with correspondingly long and impressive fangs. Apparently they use these massive body parts to duel with each other when competing for mates. Flaring their jaws and opening their fangs, they interlock with their adversary much like a pair of bull elk. 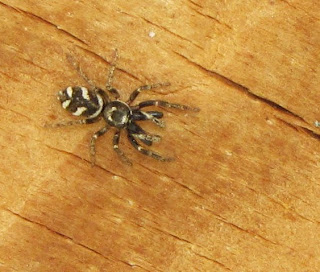 It is suspected that the Zebra Jumper is native to Eurasia, but has now spread across the temperate areas of the globe thanks to human commerce and travel.

Just about any insect or spider the same size as a Zebra Jumper, or smaller, is fair game. I once watched one stalk and kill a surprisingly large “greenbottle” blow fly (Lucilia sp., family Calliphoridae), on a wall in Cincinnati, Ohio. It slowly walked around the fly until it got directly behind the insect. I watched as it wiggled its abdomen, presumably laying down a launching pad of silk to anchor the ever-present dragline these spiders spin as a safety measure should they miss an intended target when leaping. The spider then leaped onto the back of the fly, pinning its wings in a way that prevented the fly from taking to the air. In a matter of a minute or so, it was all over for the fly. 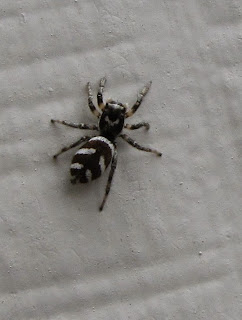 Look for these charismatic arachnids on almost any vertical surface outdoors. They occasionally stray indoors, too. Mature specimens are common from April through October, males appearing earlier than females. Mating takes place early in the season, with spiderlings growing during the summer months. Subadult specimens overwinter in protected niches. 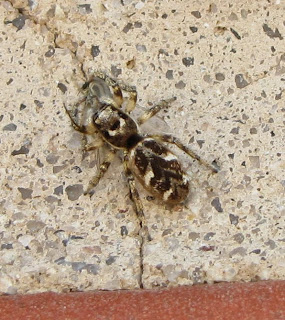 Jumping spiders in general are very alert, with the best eyesight of any terrestrial invertebrate. They cock their heads (technically the cephalothorax) in the direction of anything that interests them. This curiosity is sometimes interpreted as aggression by the casual human observer, but these are not dangerous spiders. Enjoy their engaging personalities. 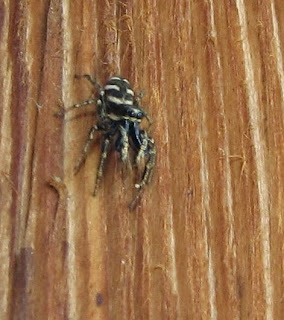