The first image in this post is not of the insect I will be discussing today. That is because I am far more frequently asked what these little mud barrels are, and what makes them. Indeed, you are more apt to stumble upon these nests than you are to see their maker. While most spider wasps in the family Pompilidae dig burrows for their nests, or exploit pre-existing cavities, those in the genus Auplopus create free-standing mud cells. 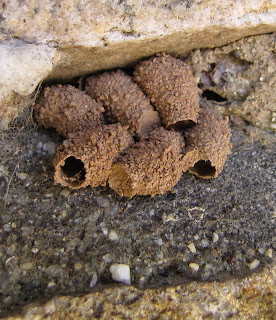 I have few images of these wasps, and detest “stealing” images from others for my posts even though I give full credit when I do, so I hadn’t done an entry about Auplopus until now. It took a Facebook post by Eileen Miller to remind me that I was overdue to address them. Eileen was kind enough to share her own images in exchange for learning more about the wasps and their nests. 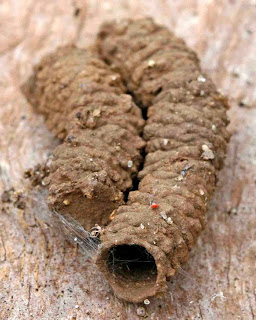 There are ten recognized species of Auplopus in North America, but the genus is in dire need of revision. Collectively, the genus occurs across the entire continent. One species, A. carbonarius, is introduced from western Europe, and has been documented in New York and Michigan, but probably has a wider distribution in the U.S. than is currently known. 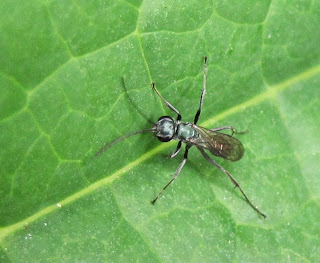 Several species are bright metallic blue-green, and the females at least are basically inseparable externally. Males can be identified by differences in the genitalia. Auplopus are small, averaging about 10 millimeters in length. Females have an oval spot on top of the abdomen near the tip called a “pygidial plate” that they use like a masonry trowel to manipulate mud pellets into segments of their mud nests. The female curls her abdomen beneath her during such work, so that the pygidial plate can contact the mud. 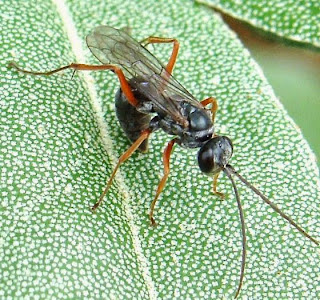 The nests are usually constructed inside pre-existing cavities in wood, or at least in sheltered niches such as under bark on standing trees, crevices in rock walls, or even inside the abandoned nests of other wasps like Sceliphron caementarium (Black and Yellow Mud Dauber), Trypoxylon politum (the Pipe Organ Mud Dauber), and paper wasps (Polistes spp.). The tiny barrel-shaped cells are roughly 15 millimeters in length and 7-10 millimeters wide, often stacked end-to-end, two to five per row. 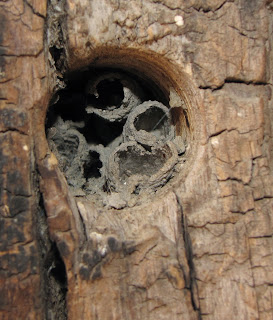 Nest inside hole where a bolt used to be

The wasps appear to be mostly opportunistic hunters of spiders that do not spin webs. 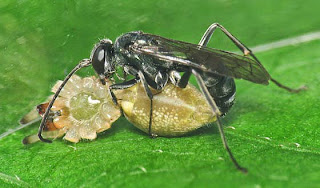 Adult or immature spiders may be taken, and the wasps usually amputate several, if not all, the legs of their prey. This allows the wasp to feed on the blood of the spider, but also facilitates easier transport of the victim over the ground. Presumably, more than one spider is placed in each mud cell before the female lays an egg on the last victim and then seals the cell. © Eileen Miller, inside of cell showing pupa in cocoon

In at least one species, the emerging adult wasp regurgitates liquid to soften the mud cap on its cell, allowing it to more easily chew its way to freedom.

Auplopus seldom visit flowers, but can often be found around aphid colonies on honeyvine milkweed (Ampelamus albidus, Cynanchum leave), sunflower, and other plants. They feed on “honeydew,” the sweet liquid waste products that aphids secrete. 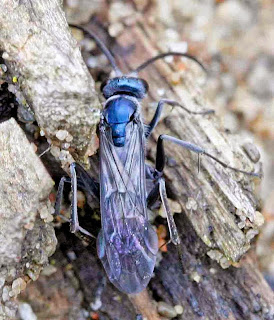 Look for these little wasps from May to October, but especially July through September when they are most abundant. It should be noted that other Hymenoptera make very similar mud nests, particularly some of the Osmia mason bees, and some mason wasps (family Vespidae, subfamily Eumeninae). Auplopus are surprisingly well-studied insects, but information is scattered over articles in many different scientific journals and books. 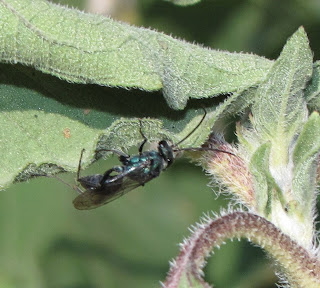