My wife, Heidi, seems to have a knack for finding noteworthy insects at her workplace, the Cheyenne Mountain Zoo. Her most recent discovery is apparently the first confirmed U.S. record of Sceliphron curvatum, an Asian mud dauber wasp in the family Sphecidae. This is a species you need to Be On the Look Out for, and that should be reported to your state or provincial department of agriculture. 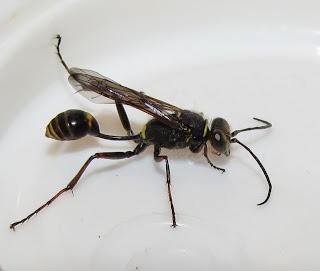 Initially, I thought the wasp Heidi captured on April 29 was a blue mud dauber in the genus Chalybion, as it appeared to be dark with few, if any markings, but the container was rather opaque. Removing the wasp from the container and taking images revealed it was actually a species of Sceliphron, of which the native species S. caementarium is locally abundant.

Still, something seemed a bit off. The wasp was indeed dark, devoid of most of the usual bright yellow markings on the legs and body. I quickly uploaded the images to my computer, and posted one on a Facebook interest group for experts in the order Hymenoptera. Meanwhile, I did a little investigating online, and found images in Bugguide.net from Montreal that resembled the specimen.

The Bugguide category is currently “Sceliphron curvatum-or-deforme” because the two species, native to Asia, are apparently difficult to distinguish. I then looked up Google images for S. curvatum and it became clear that the Colorado Springs specimen was at least a close ally of that species. 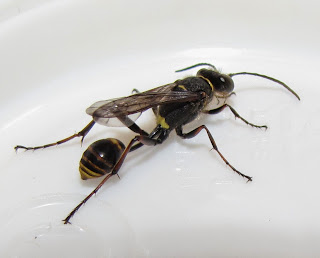 Back to Facebook. Étienne Normandin of Montreal, and Doug Yanega, an entomologist at the University of California, Riverside, both came to the same conclusion I had, but they have authoritative credentials that I do not.

Sceliphron curvatum is noticeably smaller than our native species, ranging from 15-25 millimeters in body length as opposed to 24-28 millimeters for S. caementarium. Other than size, and differences in color pattern, the two wasps are very similar in their natural history. Each female wasp constructs her own mud nest consisting of one or several cells attached to protected surfaces such as beneath a cliff overhang, under bridges, under the eaves of buildings, or inside old barns. S. curvatum evidently has a propensity for nesting indoors, attaching mud cells to walls, piles of old books, clothing, and furniture. This more “domestic” lifestyle no doubt makes it a prime candidate for spreading far and wide via international commerce. It is easy to overlook a small, earthtone object attached to something.

Mud daubers are predators of spiders, with more generalist tendencies than spider wasps in the family Pompilidae. So, nearly any kind of spider is fair game. Many spiders are paralyzed and piled into a single mud cell before the mother wasp lays a single egg and seals the cell. The larva that hatches feeds on the cache of food, eventually pupating. The adult wasp that emerges then chews its way out of its clay crib 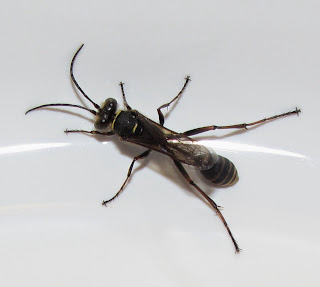 S. curvatum is native to India, Nepal, Pakistan, Kazakhstan, and Tadjikistan, in the foothills of the Himalayas and other mountain ranges. Great. The Front Range of Colorado is essentially the same habitat. It was first reported from Europe in southeastern Austria in 1979. Since then it has spread to Slovenia, Italy, Croatia, Switzerland, France, Hungary, Germany, Serbia and Montenegro, Greece, the Czech Republic, and Slovakia (Bosusch, et al., 2005). Much of its range extension is attributed to the wasp’s own natural dispersal capabilities.

The species has also turned up in and around Buenos Aires, Argentina, as reported in 2008 (Compagnucci and Alsina, 2008). On July 7, 2013, images of a specimen of S. curvatum, next to a mud cell, were posted to Bugguide.net from Montreal, Quebec, Canada, representing the first North American record for the species.

Please put this species on your radar, and maybe pay closer attention to mud daubers in general since it is easy to overlook this newcomer. 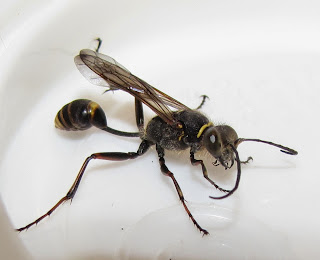