Everyone has their own icon for a harbinger of fall, but mine has to be the assassin bugs in the genus Acholla (Gesundheit!). Adult specimens can actually be found regularly beginning in July, at least in some localities, but are most obvious in autumn, perhaps because foliage is falling and prey insect populations are beginning to decline. 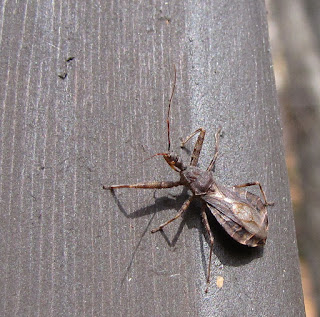 I first encountered these assassins in Massachusetts in 2009. I found one climbing on a signpost at the Mount Sugarloaf State Reserve in South Deerfield on November 1. Acholla multispinosa is our most widespread species, the only one found in eastern North America from New England south along the Appalachia Mountains to Tennessee and North Carolina, west through the Great Lakes, to Kansas, Nebraska, and southeast Iowa. 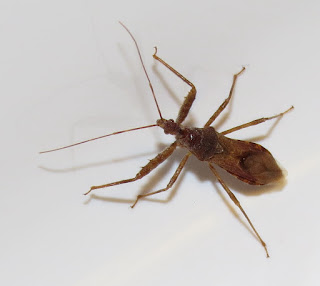 Here in Colorado, our common species is A. ampliata, which also occurs in California, Utah, Arizona, and New Mexico. Last year I found one on September 2, and another on September 8, both apparently males. I found what I assume to be a gravid female just last Friday, October 23, 2015. All the specimens were found beneath a large cottonwood tree in our reasonably urban, residential neighborhood. The bugs had apparently fallen out of the tree and were on a tall, plastic utility box beneath it. 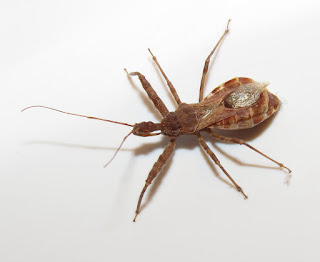 Acholla is easily mistaken for the more common Sinea species, but lacks the "thorny" appearance of that genus, and has no prominent spines on the inner surface of the tibia ("shin" segment) on the front leg. Acholla average slightly larger, too, ranging from 12-16 millimeters in body length compared to 12-14 for Sinea.

There is a third species of Acholla, A. tabida, found in California and Mexico. 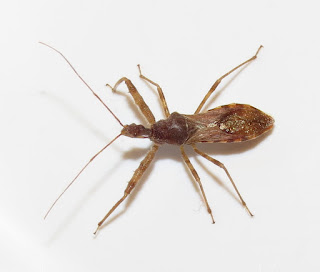 What do these assassin bugs feed on? According to one reference, A. multispinosa is an enemy of the Pine Webworm, Pococera robustella, a caterpillar in the moth family Pyralidae. Another source reports the bug to prey on caterpillars of the Codling Moth, Cydia pomonella, family Tortricidae (the "worm" in the apple). Acholla in general are mostly arboreal (tree-dwelling) and thus feed upon insects associated with trees. Indeed, woodlands and orchards seem to be this insect's primary haunts. 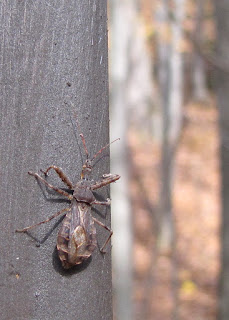 Acholla overwinters in the egg stage. The eggs are adhered to a substrate with, and protected by, a hardened secretion from the female's subrectal glands. This material probably insulates the eggs from weather and dessication, but may also repel potential egg predators. Diligent searching has failed to turn up any further information on the life history of Acholla. More appears to be known about its chromosomes, ironically enough.

So, before you put away your field gear for the winter, take one last look for these autumn assassins. You might easily add to our knowledge of their geographic distribution and natural history. 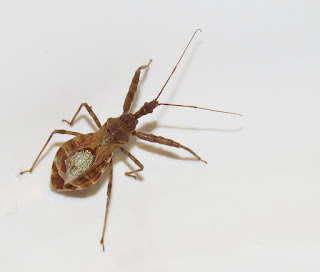