I could write blog posts about internet hoaxes from here until the end of time. The latest is a "killer bug" that you should not kill with your bare hands because it spreads a lethal virus that also disfigures your skin. What a crock! Thanks to Hoax-Slayer we have the straight scoop.

Well, I can tell you about the insect pictured. Truth may be stranger than fiction in this case. Males of giant water bugs in the genera Belostoma and Abedus care for the eggs of their mates by carrying them on their backs. That's right, these giant water bugs, far from being people-killers, are the poster children for what a caring father looks like. 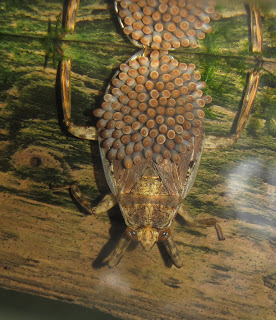 The female giant water bug adheres her eggs to the back of the male, and he then guards them. He keeps the ova free of fungus, and well-aerated.

Ok, so what about the horror of that human hand? According to Hoax-Slayer, it is the work of a make-up artist, wrought of putty rather than some horrid disease. The sponge-like texture and pattern simply resembles the hatched eggs on the back of a male giant water bug.

Similar hoaxes have used photo-editing techniques to merge lotus pods or the mouths of lampreys with human body parts, the better to gross-out viewers.

According to an article on Snopes.com, yet another factor comes into play. The meme may be targeting people with "trypophobia," a supposed fear of holes or fear of irregular patterns of holes. No such phobia is documented in scientific literature, however. So, apparently this hoax is a triple-header: fear of insects, fear of disease, and fear of holes, all wrapped up in one whopper of a tale.

There is a slight grain of truth to this over-dramatized viral meme, though. Giant water bugs are predators of other aquatic organisms, and they deliver a venomous bite to paralyze their prey. The venom contains enzymes that aid in extraoral digestion. That is, the saliva begins breaking down tissues of the prey so that it can be withdrawn through the insect's beak and into its digestive system. The bugs will bite in self-defense, too, so handling them should be discouraged for that reason.

Ah, if only truthful information spread as quickly and effectively as fear-inspiring hoaxes like this. Please do your part by investigating the validity of a given meme before sharing it....or share it with a bold disclaimer. Thank you.