I have no idea just how “regular” this feature will be, but I do have plenty of spider stories to tell, more than a year’s worth already. My involvement with the website SpiderIdentification.org has shown me just how much I have yet to learn about these amazing arachnids. Why not start out with a really spectacular species, then? The Silver Argiope, Argiope argentata certainly fills the bill. 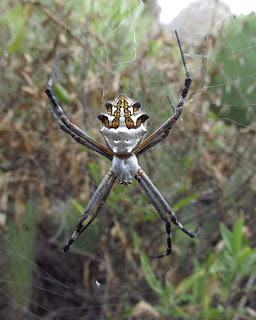 Kim Moore, a nature photographer in Long Beach, California was kind enough to introduce this species to me last month at Bolsa Chica Ecological Reserve in Huntington Beach. I was surprised when she told me she usually sees the adult spiders about the same time as the Great Blue Heron chicks in the spring. Every other species of Argiope that I am familiar with does not mature until late summer.

Kim quickly found one amid a large patch of prickly-pear cacti on a steep embankment above the tidal marsh….then another….and another. There had to have been hundreds of them, and most of them mature females and males. They hung in the center of their orb webs the weight of the females warping the plane of their webs a bit. 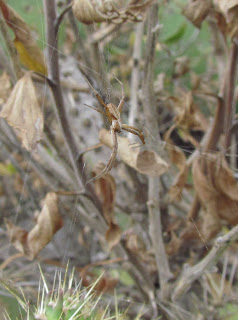 The males look nothing like their mates. They are vastly smaller for one thing, only 4-5 mm in body length compared to the female’s 12-16 mm length. Males are also not as brightly colored. Some were already paired up with females when we found them.

This species is known to range from southern Florida to southern California. According to Mandy Howe, my comrade at SpiderIdentification.org, adults of Argiope argentata can be found at almost any time of year. Males mature very quickly, as early as February and as late as June. Mandy cites a paper by Herbert W. Levi that suggests this species may not be “annual” like the other members of the genus that range farther north. 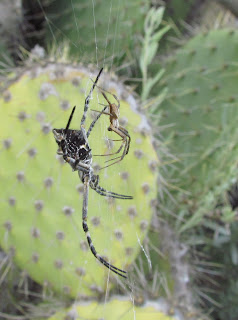 The web is a characteristic “orb” web, round with radiating spokes and a spiral of sticky threads. The central “hub” is where the spider sits, her abdomen tipped back away from the plane of the web (except, I observed, when closely approached: then she plasters her abdomen against the hub).

The genus Argiope typically incorporates a zigzag band of silk down the middle of the web. This decoration is called a stabilimentum, and its function is the subject of continuing debate. It may act as an advertisement to prevent birds from tearing through the web, but a more likely theory is that it is a fake flower designed to attract pollinating insects. Indeed, the thick band of silk reflects ultraviolet light much as many flower petals do.

While other Argiope species generally have only a vertical stabilimentum, the Silver Argiope usually employs an X-shaped version. The female spider aligns two pairs of legs with each of the silk bands. Her own silvery body also reflects UV light, perhaps turning her into the perfect faux blossom. Oddly, the population at Bolsa Chica seems to have eschewed the silken “X” in their webs. I observed no decorative silk at all.

Keep an eye out for these if you find yourself in the geographic range of this arachnid. It is certainly hard to beat as one of the most ornate spiders in North America.