Heidi and I were away last week in Cape May, New Jersey for a belated honeymoon, celebrating in the same place we had our first “date” back in October, 2010. We went a week earlier this time, and visited some locations we had missed on our last trip. Consequently, we saw some different birds and insects, including a wasp that was on my “bucket list.” 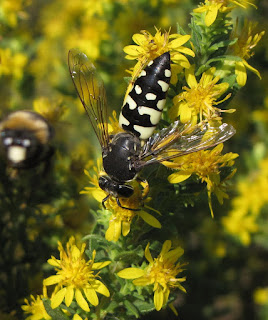 The Triangle Point Butterfly Garden, a tiny park near Cape May Point State Park, is planted with a variety of native and exotic flowers that attract many kinds of insects. We visited in the early afternoon of October 5, and found another party looking at the butterflies, but wondering what the big black and white wasps were.

”Oh, my God, that’s a Horse Guard!” I couldn’t contain my enthusiasm as I frantically focused my zoom lens on the wasp. I had forgotten that Stictia carolina, the largest of our “sand wasps” aside from cicada killers, ranged this far north, and persisted into the autumn months. 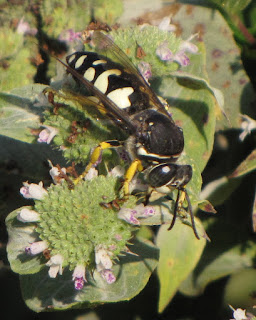 The Horse Guard is found from New Jersey and Pennsylvania south to Florida and west to Illinois, Kansas, and New Mexico (barely). It is most abundant in the southern Great Plains. Though solitary, each female excavating her own nest, many wasps may nest in a small area of sandy soil.

How did the Horse Guard get its name, you might ask? Also known as “cowfly tigers” and “insecto policia,” the wasps are specialist predators that chiefly attack horse flies. Naturally, the best place to hunt horse flies is around equines. The female wasps will fly around a horse, up and down each leg, searching for their prey. They can even fly backwards in front of a moving horse. This hunting behavior is frequently interpreted as aggression by “hornets” by the average, intimidated horseback rider or ranch hand. Once people understand the intent behind the wasps’ persistent hovering, the usual reaction is one of relief and elation.

”That’s fantastic! How can I encourage more of these wasps for horse fly control?” 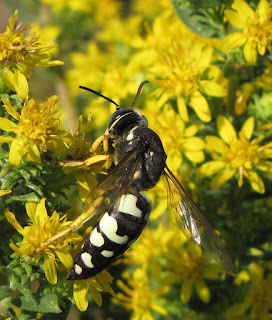 Short of importing a sand dune, as the late Howard E. Evans writes in his book Wasp Farm, there is very little one can do to ensure the presence of horse guards at any given farm or ranch. The best thing to do is simply not kill them or accidentally obliterate their nesting areas.

Males search for females by engaging in “sun dances,” which are level flights in circles, figure eights, or sinuous patterns, occasionally perching on low herbs, dung, stones, or on the ground. These patrol beats are most often in the vicinity of female nesting areas, and usually in the morning hours. They will actively chase each other, or molest other large insects that pass through their individual territories.

Females take a surprisingly long time to complete a burrow, taking an average of 22-30 hours. Burrows are usually initiated in the morning, with frequent breaks as the sun becomes more intense, with digging activity increasing again in the late afternoon. The wasp closes the tunnel each time she leaves the vicinity. The burrow is a diagonal excavation, averaging 35-51 centimeters in length, and to a depth of 18-24 centimeters. Soil properties influence these numbers. The tunnel terminates in a single cell, where the wasp deposits a single egg.

Once the nest is completed, the wasp begins hunting, feeding her larval offspring in the progressive fashion that birds do. Between visits, the wasp makes both an inner closure that seals off the terminal cell, and an outer closure that obscures the nest entrance at the surface. Fifteen to thirty-five flies may be fed to the average wasp larva during its lifetime. Larger flies (like horse flies), mean fewer flies are necessary to feed a growing larva. Still, the hunting tactics of the wasps can be very effective in protecting livestock from blood-sucking flies. 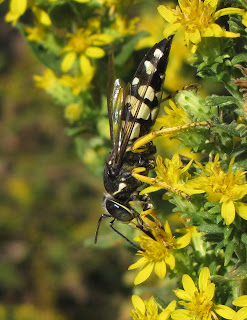 The double closure of the burrow between the frequent visits by the mother wasp helps eliminate many of the opportunities parasites usually use to gain entry into sand wasp nests. “Satellite flies” in the family Sarcophagidae (subfamily Miltogramminae) do deposit their own tiny larvae on the prey carried into the nest by the female Horse Guard, but those larvae are generally content consuming the leftovers of prey, rather than attacking the wasp larva itself.

Interestingly, while I was employed by the Cincinnati Zoo in 1988, we received pupae of horse guards from Mississippi that yielded both the expected wasps, but also “Cow Killer” velvet ants, Dasymutilla occidentalis. This would imply that occasionally the Horse Guard offspring fall prey to larvae of velvet ants.

There are two other species of Stictia in the southern U.S., but even more in the New World tropics (28 species total).

Look for the Horse Guard if it ranges in your part of the U.S. All the specimens imaged here are females, by the way. Males, active much earlier in the season, have the white markings confined to the front half of the abdomen only. 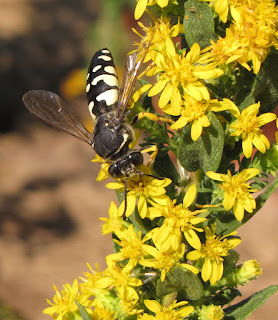