Note: This is the debut installment of a semi-regular feature I am dubbing “Fly Day Friday.” It should be noted that the concept of “Fly Day Friday” originated as a group on the photo-sharing website Flickr. I hope that what I offer here is viewed as a complement to that Flickr group and not as an attempt to usurp what they have going there.

On warm winter days, you may be disturbed to find several medium-sized flies bumbling against your window panes, especially if you live in a rural area. Where did they come from? Why are they active at such a cold time of the year? Exactly what are they? House flies? 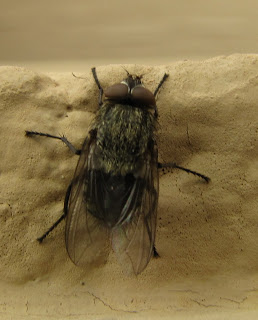 They are probably blow flies in the family Calliphoridae; specifically, “cluster flies” in the genus Pollenia. While most blow flies are associated with rotting animal carcasses, cluster flies have an entirely different life cycle: depending on the species, they are parasites or predators of earthworms, or parasites of caterpillars, bees, or other insects.

Until fairly recently, it was thought that there was only one species in North America: Pollenia rudis. Now, six species are recognized, differentiated by minute characteristics not generally visible in images of living specimens in the field. The number, position, and length of setae (stiff hairs or bristles) on various body parts are key characters (Jewiss-Gaines, et al., 2012).

During the spring and summer, cluster flies are most often seen on flowers like Queen Anne’s Lace (Daucus carrota), where they are sipping nectar. They can be easily mistaken for overgrown house flies, but fresh specimens have a coating of golden hairs on the thorax. These hairs are easily abraded, however, so older specimens often lack this glistening quality. I have also seen cluster flies lapping up “honeydew,” the sweet liquid waste of aphids and scale insects. The flies will flit from leaf to leaf, eagerly sopping up the sticky goodness with sponge-like mouthparts at the tip of their elbowed proboscis. 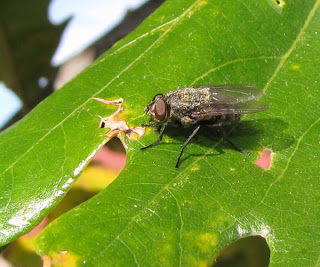 Once cooler temperatures set in, Pollenia enjoy basking on the sunny side of buildings, like other kinds of blow flies do. They prefer white structures, or other pale colors that reflect the heat. Eventually, the flies seek shelter for the winter, and this is when they become a nuisance.

Despite their robust appearance, they are adept at squeezing into small openings that permit their entry into window frames, wall voids, and other snug niches. There, they can pile up by the hundreds, especially in older homes. They usually stay there until the weather warms again, when they exit without fanfare. Unseasonable temperatures in mid-winter may cause them to stir, however, and they can become disoriented, finding their way inside rooms where they fly aimlessly with an irritatingly loud buzz.

Cluster flies thankfully do no harm to people or pets. They carry no diseases that we know of, and are decidedly only a “nuisance pest.” Smashing one can leave a greasy stain on the wall, though.

The life history of the earthworm parasites is well known. Female flies lay their eggs in early spring, depositing two or three at a time in the soil. The larvae hatch in four to six days and begin searching for their earthworm hosts. A larva enters the worm through the male genital perforation, or close to it. For about the next two weeks, the maggot feeds inside the earthworm, periodically punching a hole in the worm’s body wall to take a breath of air. Ironically, the maggot’s spiracles (breathing holes) are located on its rear end, so it must stick its butt out the worm’s body to breathe.

Once it has matured, the fly larva exits the worm (usually the worm is still alive at this point), and pupates in the soil. The fly pupa is encased the last larval skin, which is hardened into a capsule-like structure. The pupal stage takes from 39-45 days, after which the adult fly bursts from its capsule. The cycle is then repeated, for up to four annual generations. 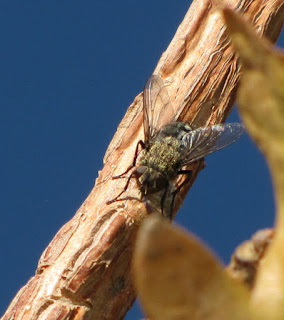 Pollenia rudis probably originated in Europe. How do we know this? Nearly all native earthworms in North America were wiped out by glaciers during the ice age. The overwhelming majority of worms you see today are European immigrants that found their way across the Atlantic in the soil used for ships’ ballast in those vessels that brought our own ancestors here.

Pollenia rudis and P. pediculata are by far the most common cluster flies you are likely to encounter in the U.S. and Canada. Pollenia vagabunda and P. labialis are likely recent introductions from Europe (1950s and 1960s).

Take a closer look at that “house fly” the next time you see one. It is probably a cluster fly instead. House flies are smaller, with bright white faces. See how many other flies you can find on the inside and outside of your own home. You might be surprised at the biodiversity you make no effort to support. 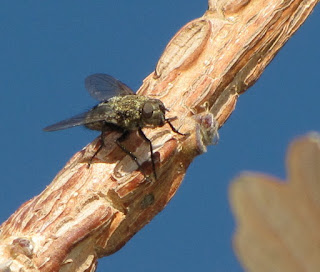