Here along the Front Range in eastern Colorado, among the first flies of spring are unique little robber flies in the genus Comantella. When I first saw one I thought it looked like a march fly (Bibionidae), but behaved like an asilid. 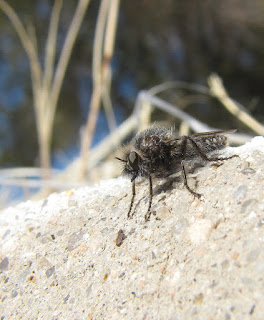 Comantella are also among the last flies seen in the fall, as demonstrated by the above image taken on Novermber 29, 2011 in Colorado Springs. This unusual seasonal appearance of the adults (early and late), plus the presence of a slender spur on the tip of the front tibia (“shin” segment), helps to separate this genus from similar genera in the Asilidae. They are decidedly humpbacked when viewed in profile. Little appears to be known concerning their biology, though it is suspected that the adult flies overwinter in protected places. One specimen of the species C. fallei was observed preying on a small wolf spider in the genus Pardosa (Dennis, et al., 2012). 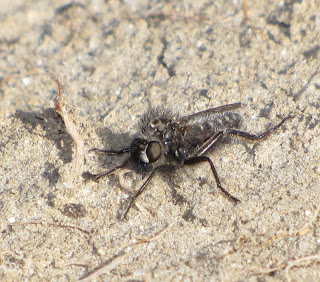 The taxonomy of Comantella is not very straightforward, either. At least one expert on asilids believes the genus is in bad need of revision. Current keys to species seem to revolve around the length of the terminal style as compared to the third antennal segment, and coloration of the hairs on the body.

These are small or medium-sized flies, 10-15 mm in length, and covered in long hair, even on their legs. The top of the thorax features a “mane” that can best be described as a Mohawk hairstyle.

There are only four currently-recognized species of Comantella. C. pacifica is found from British Columbia south to Nevada and Utah. C. cristata is known from Idaho and California. C. rotgeri occurs in Colorado, New Mexico, and Alberta. C. fallei ranges in California and Colorado. 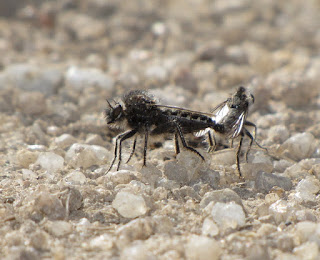 I expect to see more of these flies any day now. Last year I found this mating pair on March 12, but the winter was very warm. In all instances I have found Comantella perched on the ground (rarely on vegetation), usually on bare soil, in vast open fields. 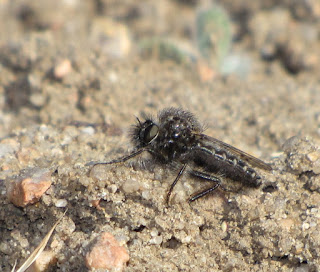