Sometimes you go looking for spiders, and sometimes it seems they come looking for you. The second statement isn’t really true of course, but at the least you usually don’t have to go far to find arachnids. Here in the western United States, funnel-web weavers in the genus Hololena are abundant, even in the average yard or garden. Entire hedges can be full of their sheet-like webs. 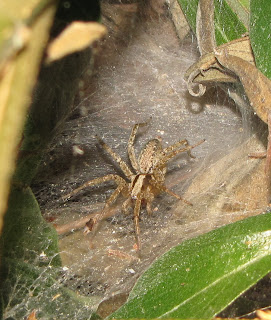 Meanwhile, juvenile specimens, and mature males, will wander away from their webs, often straying indoors. It can be startling to suddenly have a spider appear on the wall while you are watching television.

Hololena is easily confused with other genera in the family Agelenidae, and to be fair it is only microscopic examination of certain body parts that can confirm the identity of any given specimen. Hololena is, however, readily separated from Agelenopsis based on the length of the spinnerets. Agelenopsis (and Calilena, too) have long spinnerets usually held parallel to each other. Hololena has short spinnerets, often directed somewhat inward toward each other. 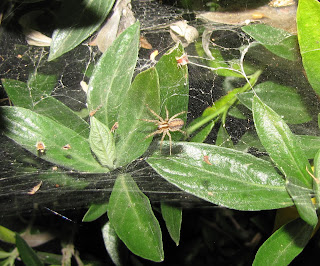 The genus Hololena appears to be restricted to the western third of the U.S., from Washington and Idaho south to southern California and New Mexico. There are approximately thirty recognized species, but the genus is in dire need of revision according to some arachnologists.

Agelenids in general spin thick, flat, hammock- or bowl-shaped webs with a funnel-like retreat in one corner. The web is not sticky. A tangle of threads above the silken platform intercepts flying insects, knocking them onto the sheet. The spider is extremely sensitive to vibrations and dashes out immediately to subdue its prey. It quickly drags the victim back into its lair to feed.

Male spiders have to approach females cautiously and deliberately. In Hololena, the male more or less bounces his legs and abdomen on the female’s web, creating a bout of one to six vibrations. A receptive female responds by drawing in her legs and lapsing into “cataleptic paralysis.” The male will draw closer and repeat his vibrational overtures until he is accepted or repelled. He then crawls over her back, gently grasping her two hind legs and dragging her deeper into her retreat. 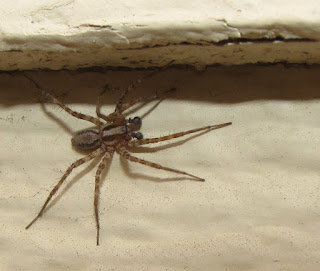 Mating occurs when the male is able to turn the female on her side and insert one of his palps into her genital opening (epigynum). He repeatedly inserts his palp and pumps sperm into her before attempting to maneuver her into a position where he can insert the opposing palp. The female usually offers no resistance during this process. Once finished, the male grooms his palps and walks off the web. Occasionally his mate recovers from her paralysis prematurely and actively chases him off her web.

Mature males can be seen looking for females deep into the fall. The specimen shown above was observed on October 29, 2012 in Colorado Springs. 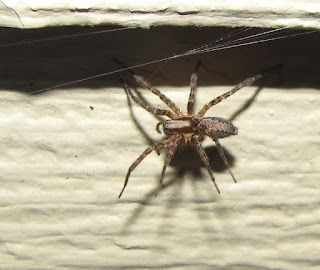 Researching this post I was startled to learn that there are confirmed cases of Hololena spiders biting people. It should be noted that actual spider bites are a pretty rare phenomenon, and the usual result is mild pain and swelling that doesn’t require medical treatment. Dr. Richard Vetter at the University of California, Riverside, published a note documenting three separate, verifiable instances of adult people who were bitten by Hololena spiders. Two were adult men, bitten by female spiders. The victims experienced headaches and four-hour episodes of vomiting. The third victim was an adult woman, bitten by a male spider, who experienced a very mild reaction. All three were perfectly fine in a matter of days without seeking medical attention (Vetter, 2012). 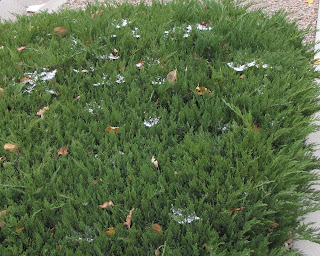 One need not be fearful of these spiders. I prefer to be enchanted by their delicate yet durable spinning work. I remember vividly a light snowfall we had here in Colorado Springs on October 25, 2012. The only place the flakes persisted was on Hololena spider webs. What an amazing scene! Take a look around your own neighborhood, especially on damp early mornings when dew has condensed. You will be amazed by the number of webs you hadn’t known were there. 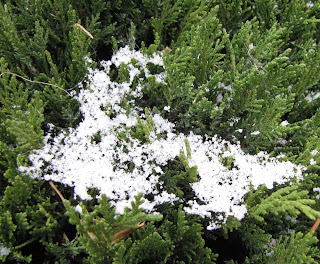