One of the challenges I enjoy is matching caterpillars to their adult moths, and vice versa. Usually one of the two is spectacular and obvious, and the other is cryptic and/or scarce. Such was the case when I encountered the larvae known as the Sophora Worm, Uresiphita reversalis, of the family Crambidae. 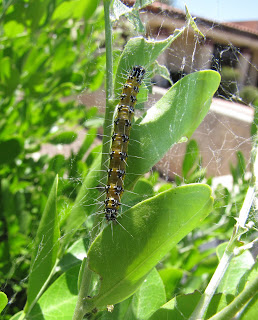 I found many of the caterpillars amid their silken webbing on a common ornamental shrub in Tucson, Arizona on May 20, 2010. Turns out the plant was Texas Mountain Laurel, Sophora secundiflora, easily identified by its large, purple flowers and resulting robust pea-like pods. This is a native host for the moth, but the caterpillars are also known to eat non-native “broom” plants such as French Broom (Genista monspessulana), and other Genista species. This habit has given rise to an alternate name for the Sophora Worm: “Genista Broom Moth.”

Additional host plants include lupines (Lupinus), acacia (Acacia), false indigo (Baptisia), and other leguminous plants. It is also reported from Crapemyrtle (Lagerstroemia indica) and honeysuckle (Lonicera), but these are probably incidental. 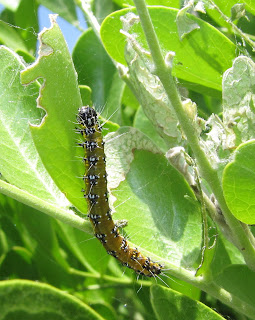 The caterpillars feed out in the open, in groups, and during the day, in stark contrast to most caterpillars that are solitary and nocturnal, the better to avoid potential predators. The bold colors suggest that Uresiphita reversalis is distasteful to their enemies, and indeed they accumulate the toxins of their host plants for use in their own self-defense. They sequester the quinolizidine alkaloids found in their leguminous host plants, incorporating the chemicals into their exoskeleton. Even so, damsel bugs and other predatory insects with piercing-sucking mouthparts simply bypass this external defense by puncturing the cuticle and feeding on the internal tissues of the caterpillars (Bernays and Montllor, 1989). 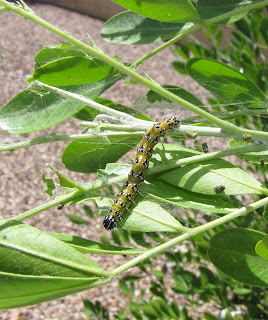 The length of the life cycle of this species varies considerably depending on season and latitude. It can be as short as five weeks from egg to adult under optimal summer conditions in southern climes, and as long as 25 weeks in winter in the more northerly reaches of its range. There may be four or five generations annually. In Berkeley, California there are two major flight periods, one from March to May and the other from July to October. Overwintering usually occurs in the pupal stage, but adults are sometimes found during this season as well.

Eggs are laid in clusters (averaging about 19 per clutch in the lab) on the upper- or underside of leaves. The larvae go through five instars (an instar is the interval between molts). Pupation occurs inside an opaque, white cocoon woven amid dense webbing. 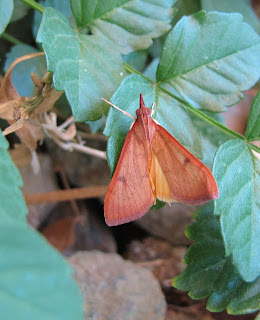 The adult moth has a wingspan of 27-34 millimeters. They are seen most often during the day and are easily startled from their resting place. The body and legs of the moth are bright white. The hind wings, usually not visible when the insect is at rest, are bright yellow or orange.

One reference asserts that the Sophora Worm is native to Mexico and the southwest U.S. and has spread with its hosts up the coast of California to the Bay area; and also north and east to the Great Lakes and mid-Atlantic states, even Maine and Nova Scotia. It became established in Los Angeles in 1930, spreading rapidly from there. By the 1980s it was spreading through the San Joaquin and Sacramento Valleys (Powell and Opler, 2009).

I didn’t find an adult moth until more than a year later. The specimen imaged here was in the same neighborhood where I found the caterpillars, on June 11, 2011. 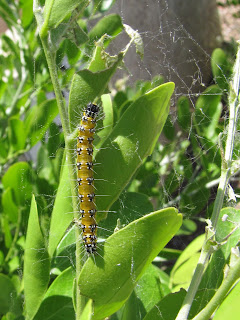 Note that this moth was formerly classified in the family Pyralidae, and is often still placed there incorrectly on several internet resources. It is currently in the family Crambidae, subfamily Pyraustinae.