Southern Arizona is blessed with some of the most attractive moths in the U.S. One of the more subtle beauties is a member of the giant silk moth family Saturniidae. We tend to think of the spectacular Luna Moth, Cecropia Moth, or Polyphemus Moth as popular examples of that family, but many species are much smaller. Hubbard’s Silkmoth, Syssphinx hubbardi, has a wingspan of only 56-76 millimeters, females at the higher end of the spectrum. 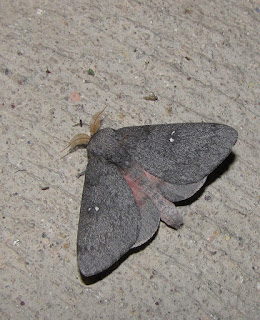 The overall gray color might make it seem to be rather drab, but the hind wings are bright pink, exposed when the moth is startled. The males are often attracted to lights at night, even in urban areas like Tucson.

The caterpillars are the truly colorful life stage for this species, but still amazingly cryptic. The natural host plants are Catclaw Acacia (Acacia greggii variation wrightii), Honey Mesquite (Prosopis glandulosa), and Little-leaf Palo Verde (Cercidium microphyllum). The larvae feed actively at night, and can be observed with a flashlight. Young caterpillars sit individually on the underside of leaf petioles and feed on the leaf bases. Older caterpillars cut the petiole and bend the leaves downward to access more of the foliage. Some larvae can proceed from egg to pupa in under three weeks, while others, even from the same batch of eggs, take longer. 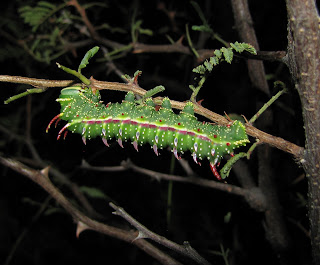 Mature larvae are around 55 millimeters in length. They pupate underground in a cell at a shallow depth, where they spend the winter. The adult moths emerge in the early evening and begin seeking mates between 11 PM and 2 AM. There is one generation each year throughout most of its range, with the adult moths on the wing between June and September, especially in July and August. Populations in Texas may have multiple generations as evidenced by adults found at lights in November.

The geographic range of Hubbard’s Silkmoth is central Texas west through southern New Mexico and Arizona to southern California, in the mountain ranges of northeastern San Bernadino County. It also occurs in Mexico south to Veracruz, where it is even more common.

There is quite a cottage industry in rearing silk moths, and much of our knowledge of the various species comes from the community of moth enthusiasts who keep careful records and experiment with alternate host plants. Those who have kept Syssphinx hubbardi note that the caterpillars will accept Honey Locust, Black Locust, and Jerusalem Thorn as well as their native favorites. 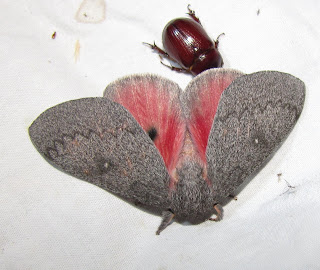 It should be noted that many references use the genus name Sphingicampa instead of Syssphinx for this species. The adult moth imaged at the top of the page was found in Rio Rico, Arizona on July 30, 2011. The other moth and the caterpillars were found in Florida Canyon near the Santa Rita Experimental Range research station on September 3, 2011. Note that individual caterpillars are highly variable in color and pattern; and larvae of the closely-related Syssphinx Montana are nearly identical and difficult to separate from S. hubbardi in the field or by photos. 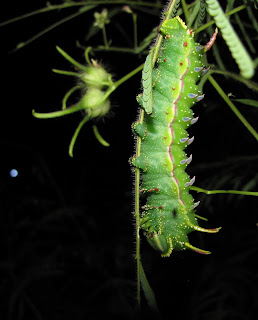