Life in a Paper Palace

Back in the 1980s I began my writing career as a volunteer with the Audubon Society of Portland (Oregon). A group of us produced an award-winning publication called The Urban Naturalist. I thought it might be interesting to visit some of those old articles, like this one in the spring, 1987 issue. 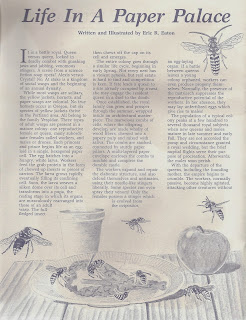 It is a battle royal. Queen versus queen, locked in deadly combat with gnashing jaws and jabbing, venomous stingers. A scene from a science fiction soap opera? Alexis versus Crystal? No. At stake is a kingdom of social wasps and the beginning of an annual dynasty.

While most wasps are solitary, the yellowjackets, hornets, and paper wasps are colonial. No true hornets occur in Oregon, but six species of yellowjackets thrive in the Portland area. All belong to the family Vespidae. Three types of adult wasps are present in a mature colony: one reproductive female or queen, many subordinate females called workers, and males or drones. Each princess and prince begins life as an egg, laid in a single, hexagonal paper cell. The egg hatches into a hungry, white larva. Workers feed the grub protein in the form of chewed-up insects or pieces of carrion. The larva grows rapidly, eventually filling its confining cell. Soon, the larva weaves a silken dome over its cell and transforms into a pupa, the resting stage in which its organs are miraculously rearranged into those of an adult wasp. The full-fledged insect then chews off the cap on its cell and emerges.

The entire colony goes through a similar life cycle, beginning in early spring. Not every nest has a violent genesis, but real estate is hard to find and competition is keen. If fate leads a queen to a site already occupied by a nest, she may engage the resident queen in a duel to the death.

Once established, the royal family can grow and prosper through the summer, wrapped inside an architectural masterpiece. The marvelous combs of cells, where the offspring develop, are made wholly of wood fibers, chewed into a papery pulp and mixed with saliva. The combs are stacked, connected by sturdy paper pillars. A multi-layered paper envelope encloses the combs to insulate and complete the durable castle.

The workers expand and repair the elaborate structure, and also defend themselves and nestmates, using their needle-like stingers liberally. Some species can even spray their venom! Only the females possess a stinger which is evolved from the ovipositor, an egg-laying organ. If a battle between queens leaves a young colony orphaned, workers can even produce progeny themselves. Normally, the presence of the matriarch suppresses the reproductive potential of the workers. In her absence, they may lay unfertilized eggs which give rise to males!

The population of a typical colony peaks at a few hundred to several thousand royal subjects when new queens and males mature in the late summer and early fall. They are not accorded the pomp and circumstance granted a royal wedding, but the brief nuptial flights serve their purpose of procreation. Afterwards, the males soon perish. 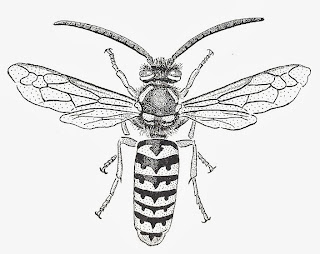 With the departure of the queens, including the founding mother, the empire begins to crumble. The workers, normally passive, become highly agitated, attacking other creatures without provocation. They may cannibalize the larval wasps remaining in the nest, or simply throw them out.

The kingdom they created with such care, they now seem to destroy with ruthless determination, reminiscent of the deterioration of the Roman empire. For yellowjackets, though, there is a resurrection. After mating, the queens seek appropriate places to spend the winter in hibernation. Most often they hide under bark on stumps and logs, curling their legs and wings beneath them. They awake the following spring to initiate their own colonies.

Be on the lookout for yellowjacket nests overhead and underfoot. The baldfaced “hornet,” Dolichovespula maculata, builds its enormous nests among blackberry canes, low in trees, and shrubbery. Some of these structures are as big as basketballs! Thankfully, the occupants are gentle in nature. Most importantly, these large black and white wasps kill great numbers of flies to feed the larvae in the nest. Sometimes, they prey on other yellowjackets, too. 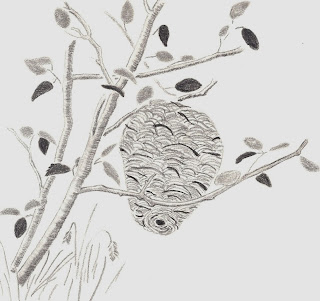 D. arenaria also builds above ground, often suspending its aerial palaces from human dwellings. The nests, and the wasps themselves, are usually small. These are yellowjackets in the truest sense, colored in alternating bands of black and yellow. They, too, prey on other insects to feed their younger siblings.

By far the most abundant and pesky species is the Western Yellowjacket, Vespula pensylvanica. Large colonies of this wasp live in subterranean nests, built in abandoned rodent burrows, rock walls, and similar cavities. What makes them a nuisance is their habit of scavenging for foodstuffs at picnics, in garbage cans, and other urban situations.. They are predators, too, sometimes killing honeybees to feed on the nectar stored in a bee’s gut. They also will swarm over ripe fruit to feed on the juices, and sip the honeydew secreted by aphids and scale insects.

The Common Yellowjacket, V. vulgaris [Edit: now V. alascensis], is very similar to the Western Yellowjacket in size, color, and habits. It, too, often feeds on carrion and human foodstuffs and becomes a pest. 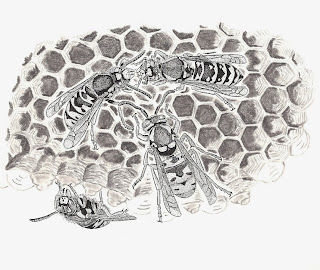 V. consobrina, the Blackjacket, resembles a smaller version of the Baldfaced Hornet, being black with sparse white lines. These scarce insects live in small colonies underground and are strictly predatory.

The Prairie Yellowjacket, V. atropilosa, is also an uncommon predator.

Yet another species will likely invade Portland this year. The German Yellowjacket, V. germanica, was originally introduced to the eastern U.S. from Europe. Besides being slightly more aggressive than native species, it has a tendency to nest in houses, between the walls! Isolated colonies have been discovered in California and western Washington, especially along the I-5 corridor. Traffic to Expo ’86 is probably responsible, at least in part, for ferrying this unwelcome immigrant to the Northwest.

Should it be necessary to remove a nest, one can do so with constructive consequences. At least one lady, Betty Pope of Rivergrove, Oregon, will rid you of problem colonies by freezing their female tenants. Their bodies can then be processed into extracts used in the treatment of stings in hypersensitive victims.

On the whole, yellowjackets are beneficial organisms. They dispose of large numbers of pest insects, and also help pollinate flowers. Studying their social behavior may shed some light on human relationships. We may learn that their mysterious population booms and busts are a metaphor for man, a disturbing thought tempered only by the reminder that yellowjackets have learned to cope successfully in an ever-changing world. 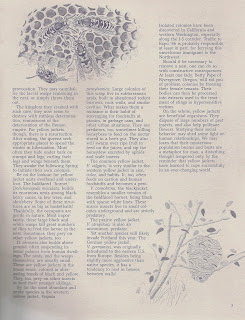 I see I had a flair for the dramatic back then. What else has changed? Entomologists were not as easily accessible back then, before personal computers and the internet. I had to use a typewriter and the telephone, and the library.