There are not that many insects that you can spot from your car driving at high speed, but the Plains Lubber, Brachystola magna, might be one of them. This heavyweight is a fixture of the Great Plains from the Canadian border to central Mexico. Adult females measure 5-6 centimeters (or more, depending on which resource you consult), while males are a mere 4 centimeters, but they are among the bulkiest of North American insects. 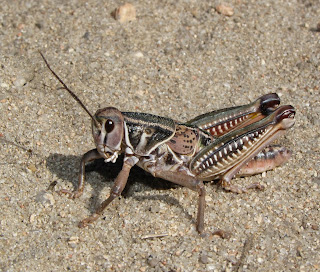 According to one source (Pfadt, 1996), female Plains Lubbers average 4,287 milligrams (0.15 ounces); adult males average 3,935 milligrams (about 0.14 ounces). This might not sound like much, but it is spectacularly weighty compared to your average insect.

The sheer size of Brachystola magna is enough to attract your attention, but they are pretty colorful, too. Most specimens tend toward brown, tan, or beige with black speckling and often a blush of red. Other specimens, especially females, can be bright green. Still others are pink or even blue. These grasshoppers become somewhat duller in color as they age. 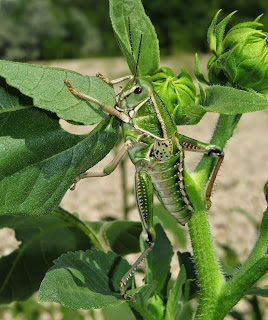 The life cycle of the Plains Lubber, also known as the "Homesteader," begins when a female deposits gourd-shaped egg pods in the soil during summer and early fall. Each pod contains 20-35 eggs. The eggs overwinter and are able to remain viable for years during unfavorable conditions such as droughts. Nymphs begin emerging from the eggs in May or June over much of the species' range, though monsoon rains trigger hatching in the southwest U.S.

Nymphs pass through five instars (an instar being the interval between molts) before reaching adulthood. This takes roughly 45 days, during which time the insects are feeding mostly on the foliage of sunflowers and other broadleaf weeds like hoary vervain, annual sowthistle, even dandelion. 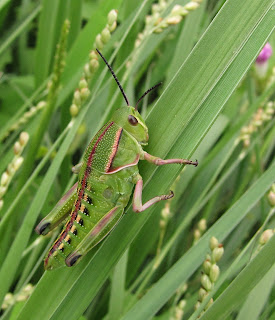 Adult Plains Lubbers do not confine themselves to a vegetarian diet. Females especially will happily scavenge on their road-killed kin, or devour weak or injured insects, and may even capture and consume smaller grasshoppers. Most members of the order Orthoptera are likewise omnivorous, to one degree or another.

The Plains Lubber can be abundant enough to be a pest, but because it is flightless, the wings reduced to mere pads behind the thorax, its ability to disperse is limited. Just the same, they are powerful leapers, females under distress jumping over one foot, and males up to nine feet when...."encouraged." Normally, a "hop" amounts to 3-5 inches. 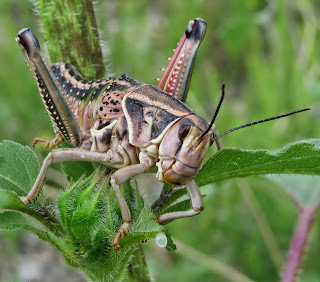 Look for these insect giants in marginal habitats such as roadsides, the edges of field crops, and disturbed rangeland. They also occupy shortgrass and tallgrass prairies, desert grasslands, sandhills, and any place with abundant sunflower. Adult specimens can be found as early as mid-June, but they are more abundant in July and August, persisting well into the fall, even November.

Lubbers are often classified in their own family, Romaleidae, or the subfamily Romaleinae under the family Acrididae. There are a total of seven genera and nine species of lubbers in the U.S. All are robust, flightless insects. 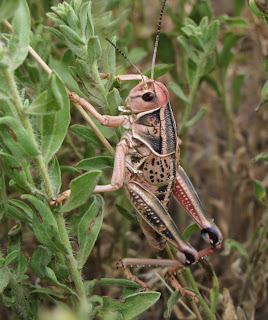