Maybe I am simply excitable in general, but I was ecstatic to find a truly astonishing insect species earlier this week here in Colorado Springs. I spied what I thought was an ordinary paper wasp (Polistes sp.) on the underside of a sunflower blossom, but something wasn't quite right. Short, quivering antennae finally betrayed it as the Wasp Mantisfly, Climaciella brunnea. These bizarre insects are most closely related to antlions and lacewings in the order Neuroptera. 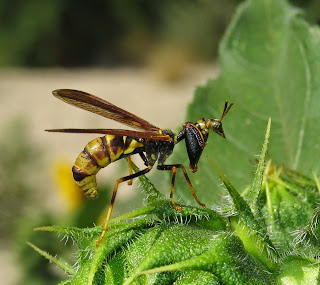 As I wrote in the Kaufman Field Guide to Insects of North America, mantispids "resemble a science experiment gone horribly wrong. Imagine shrinking a praying mantis, then attaching its front end to the hind end of a lacewing, and you have a mantispid." 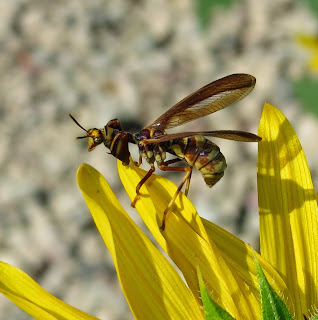 In the case of C. brunnea, the body form has been further modified to look like a paper wasp. The resemblance is uncanny. The base of the abdomen is constricted into a "wasp waist," and the wings are rotated such that they fold over the back instead of pitched roof-like as in other mantispids. Even more amazing, the leading half of each wing is darkened, to resemble the longitudinal fold in the wings of vespid wasps. When startled, the Wasp Mantispid even splays its wings like an agitated paper wasp. 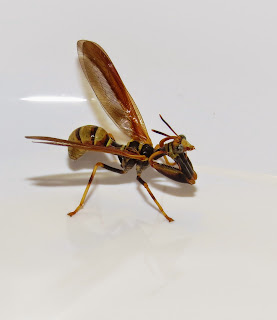 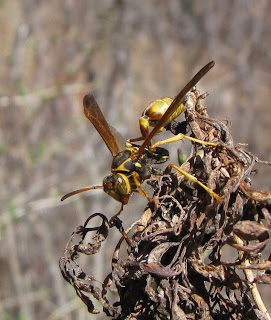 As if the adult insect is not strange enough, the life cycle is simply mind-boggling. The adult female C. brunnea deposits clutches of literally hundreds, even thousands of eggs, each on a short filament, usually on the underside of leaves. The tiny larvae that emerge probably drop to the ground. They then adopt a posture whereby they are standing more or less upright, on their hind end, swaying, and legs waving in the air. They aim to glom onto passing spiders. Only one larva per spider will survive, and competition must be keen. Assuming only one larva boards a given spider in our example, the story progresses this way: The larva clings to the margin of the spider's carapace (top part of the cephalothorax), waiting for the spider to reproduce. Should the spider be a male, the larva must transfer to a female during mating. The mantispid larva must then wait until the female begins constructing an egg sac. 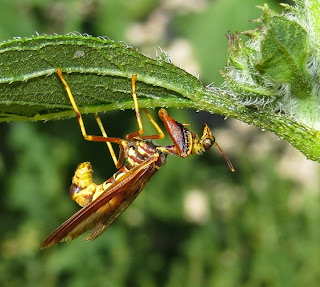 Before the female spider finishes closing her egg sac, the mantispid larva must enter the sac. The larva cannot penetrate an egg sac that is completely enclosed in silk. Once inside, the larva begins feeding on the spider eggs.

At least three wolf spider hosts have been recorded for C. brunnea: the Rabid Wolf Spider, Rabidosa rabida, and two unidentified members of the genus Schizocosa (Redborg and Redborg, 2000) in Illinois. The entire life cycle from egg to adult requires at least one year. 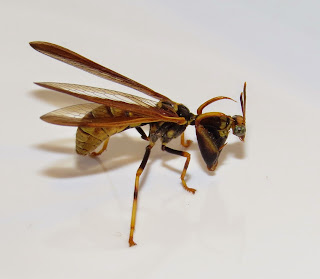 Look for the adult mantispids on flowers, especially sunflowers, thistles, and milkweed, where they wait to ambush other insects. I found a total of five specimens in quick succession on sunflowers at the edge of a big vacant field of shortgrass prairie on August 13, 2014, and three more on August 15 in the same location. So, they can be very localized in abundance.

Apparently the males live but a very short time, less than a week. Females persist for about a month. Emergence times vary, between May and October, but the overwhelming majority seem to be seen in June, July, and August. 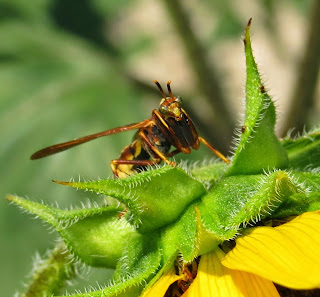 This species is widely distributed, and while considered scarce is probably more common than we realize. It is recorded from southern Canada and nearly every state except the Pacific coast states, Idaho, and Nevada, then south through most of Central America. 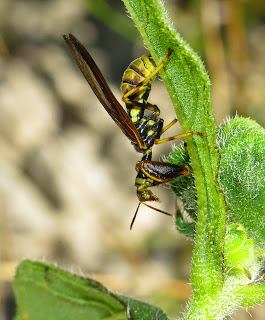