A "New" Beetle in Colorado

Exploring South Cheyenne Cañon the morning of May 2, I casually turned over a chunk of solid but rotten wood to find a large rove beetle clinging to it. Since I don't see staphylinids every day, let alone a large one, and because they typically move faster than your average insect, I bottled it up and brought it home to take a few images. Little did I know what would become of this innocent event. 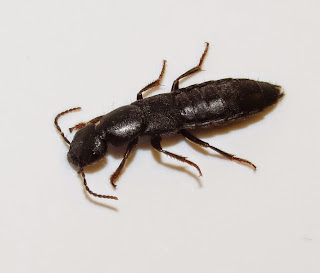 By the time I got around to putting the little fellow (it *is* a male, given the dilated front tarsi - expanded "feet") in my casserole dish staging area, he was clearly not in the best of health. Rove beetles, family Staphylinidae, are well-known for secreting foul substances or odors in self-defense, and I wonder if he asphyxiated himself in the close quarters of the pill vial.

Having limited familiarity with rove beetles, I accepted this was probably a native species of Platydracus, which includes many of our larger rove beetles. Just to be safe, I posted a couple of images on the Facebook group "Friends of Coleoptera at the Natural History Museum (Entomology Museum)." The natural history museum is the one in London, England, but the members of the Facebook group are from all over and collectively knowledgeable beyond measure. Not to mention courteous and kind.

Well, in short order I had many "likes" for the images, and a few random comments suggesting identifications. None of them were Platydracus. Agmal Qodri didn't have an answer, but knew someone who might. "What's your opinion, Adam Brunke?," wrote Agmal. Before Adam could chime in, Harald Schillhammer offered that the beetle was "Tasgius winkleri or T. melanarius." Adam Brunke then concluded it to be Tasgius winkleri.

Considering that most identifications of insects, let alone staphylinids which are among the most diverse of all insect families, hinges on minute characters like length and placement of setae (hairs), I was astounded to get a species ID from my images. There it was, though. What was perhaps helpful was the fact that this beetle is actually native to Europe, where of course it would be familiar to many members of the Facebook group.

Alfred Newton filled in the blanks with his comment: "The range of this European species must be expanding - T. winkleri appeared on both east and west coasts of North America about 90 years ago, has spread westward as far as Illinois, but was not known from anywhere near Colorado." Wow.

I did a little digging to find out more about this beetle and learned it was first reported on U.S. soil in New York in 1938; but it was probably present at least as early as 1931. Since then it has been discovered in the states of New Hampshire, Pennsylvania, Michigan, Illinois, Washington, Oregon, and California, plus the provinces of Ontario and British Columbia. 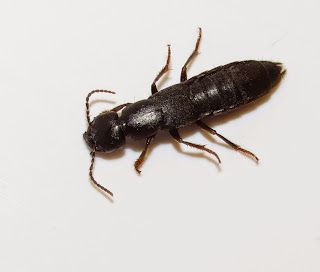 Before 1987, this species went by the name Tasgius globulifer, which it turned out included the species T. melanarius, too. Such "splitting" of one species into two or more is the result of hard work by taxonomists who are alert enough to recognize character differences overlooked by their predecessors.

You might want to keep an eye out for this beetle in your neck of the woods. It is "synanthropic," meaning that it is seldom, if ever, found far from humans, and seems to thrive in habitat heavily disturbed by us Homo sapiens. So, look under stones and boards in your garden or neighborhood park, in leaf litter, the edges of wetlands, and similar moist niches.