Wasp-watching is better around some places than it is others. Yesterday, June 12, I happened upon a lone, blooming Saltcedar tree in the middle of a huge vacant plot of land here in Colorado Springs. In a few hours I saw a greater diversity of wasps than I had seen up until then in all the time I’ve spent here. 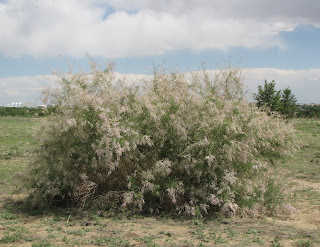 Unfortunately, Saltcedar, also known as Tamarisk (Tamarix sp.) is an invasive plant. It is native to Eurasia and Africa and was brought to North America as an ornamental tree sometime in the early 1800s. It can grow in a variety of habitats but seems to favor disturbed situations, riparian corridors, and moist pastures. It has deep taproots that can reach low water tables, interfering with natural aquatic systems. It is also tolerant of high salinity. Efforts have been made to eradicate it, but with little success. One tactic has been the introduction of a leaf beetle, Diorhabda elongate, and a mealybug (Trabutina mannipara), to eat the plant into submission.

Say what you will about the negative impacts of this tree, but it certainly attracts a variety of butterflies, bees, wasps, flies, and beetles that seek nectar at its profuse pale pink blossoms. Yesterday I spotted Painted Lady, American Lady, Variegated Fritillary, Checkered White, Orange Sulphur, Dainty Sulphur, and Gray Hairstreak butterflies. There were also a variety of tachinid flies, thick-headed flies, syrphid flies, and flesh flies. Robber flies hung around to prey on the pollinators. Sweat bees, leafcutter bees, resin bees, digger bees, honeybees, bumble bees, and cuckoo bees were there, too.

The above list is just the tip of the iceberg. The wasps were even more amazing in their diversity: 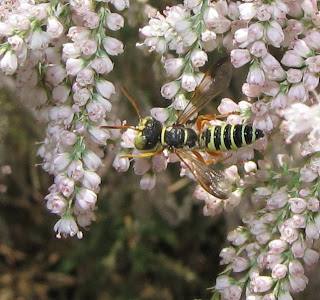 The tarantula hawk and cicada killer were somewhat surprising. I’m going back right now to see what else I can find, and try and get better images. Take a look around your own yard, garden, neighborhood, and parks, and see what flowers you can find that draw the most wasps, bees, and other pollinators. Share your findings here if you will.