It seems the theme lately has been insect sex. Seriously, I don’t think I’ve ever seen and photographed so many f*ing “bugs” (literally!) as I have in the past week or two. Wasps have been no exception. It is one of those behaviors for which they tend to sit still for a change. It is also a situation in which you can finally tell the subtle differences between the genders (or not so subtle differences in some cases). 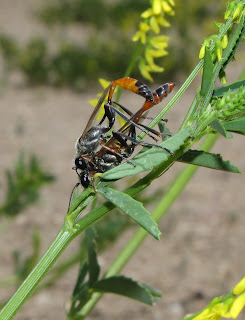 Take the example of the pair of Ammophila thread-waisted wasps shown above. The male is the one on top. The tip of his abdomen is rather blunt, and that he is deploying his, um, “hardware.” The female doesn’t seem to like this very much, though. Notice how her abdomen tapers to a point.

One may logically ask how can mating take place when a female wasp has a stinger. Wouldn’t that hurt the male? How can he get his sperm into such a small, sharp opening? Well, the stinger is not involved in copulation. In the evolution of wasps, the egg-laying organ (ovipositor) has in some cases become modified into a retractable stinger that is now used to paralyze prey, and as a weapon of last resort in self-defense. The female’s sex organs are located near the same opening from which the stinger is thrust, but again, the stinger does not participate in mating activities. 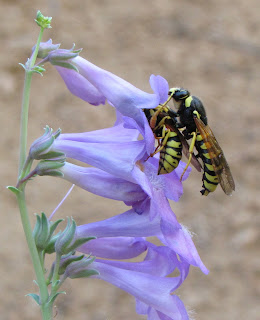 While the sexes are very similar in most kinds of wasps, this is not always the case. Above we have a pair of pollen wasps, Pseudomasaris vespoides, the male attempting to court a female that has her head stuck inside a Penstemon flower. Many male wasps are, shall we say….opportunistic in this way. To his credit, he is petting his potential mate, tapping his “chin” on her back. I wish I had video to demonstrate that, but I don’t. The male is larger than the female, with various hooks and other external anatomical features on his abdomen that help him latch onto his mate. Pseudomasaris males also have much longer antennae than the females, terminating in segments that form a club. She has clubbed antennae, too, just much shorter.

Male wasps may have other body parts modified as well. Males of crabronid wasps in the genus Astata have enormous eyes that meet at the top of their heads: all the better to see passing females as he sits atop an elevated perch. He will also chase off competing males. 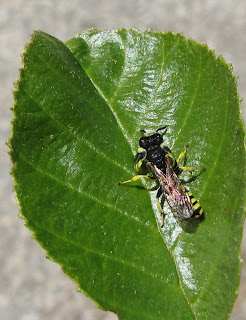 Above is a male wasp in the genus Crabro. He has the tibial segment of his front leg modified into a broad shield. Scientists speculate that these plates function in displaying to females and other males, and/or as stimulation to the female during courtship. The shields glisten in the sun, reflecting light brightly and perhaps disclosing the location of the perched male to passing females and competing males. During courtship, the male perches atop the female and covers her eyes with his shields. The shields are translucent and create patterns of light perceived by the female (Low and Wcislo, 1992).

There is much competition among males for available females. This was made graphically clear to me earlier this week when I received an image from someone via AllExperts.com, asking me “what behavior is going on here?” The picture showed three male Black and Yellow Mud Daubers, Sceliphron caementarium, stacked on top of a single female. Well, two of the males were stacked on each other, actually.

Females of Eremnophila aureonotata, a thread-waisted wasp, don’t let mating keep them from other activities. The pair shown below is resting, but “engaged” pairs can often be seen flitting from flower to flower just like single wasps. This species is common throughout the eastern U.S. and adjacent southern Canada, so keep a lookout for tandem couples. 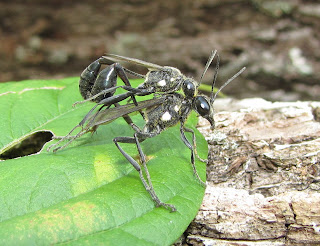 In the interest of maintaining my current followers, and in the hopes of recruiting still more, I shall refrain from any comparisons between wasps and Homo sapiens when it comes to sex. I encourage voyeuristic behavior only when it comes to watching insects and arachnids, thank you.