The term “tarantula hawk” applies to more than one species of large wasp. It even applies to more than one genus. Here in the United States, the genera Pepsis and Hemipepsis are the only tarantula hawks, and the largest of our spider wasps in the family Pompilidae. Hemipepsis ustulata is a common species across much of the western U.S., one I have encountered in both Arizona and Colorado. 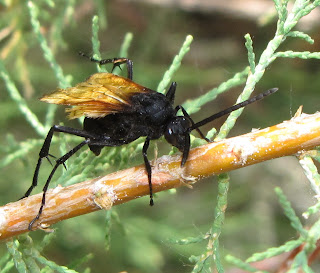 It is not easy to separate Hemipepsis from Pepsis, but I find that Hemipepsis are matte black in color, not the iridescent blue-black that their relatives are. Hemipepsis also tends to fly earlier in the season than Pepsis, especially in the southwest, but both genera can be found together in the fall, Hemipepsis being in the second generation in autumn. Wing venation is apparently the only sure way to tell the two apart, but most folks understandably don’t want to get that close to such a large, stinging insect to find out which is which. 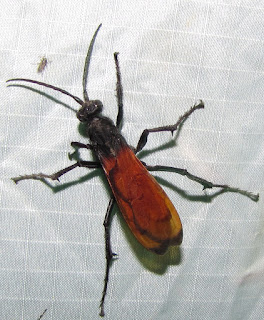 Tarantula hawks in general have interesting behaviors, especially the males. Dr. John Alcock has studied in-depth the territorial behavior of male Hemipepsis ustulata in the Superstition Mountains near Phoenix, Arizona. They are among the first insects seen in spring, but as the season wears on they become early risers, taking advantage of the brief window of time when Sonoran Desert temperatures are not too cool, but not incinerating, either. They are looking for prominent outposts, often Palo Verde trees atop hills. 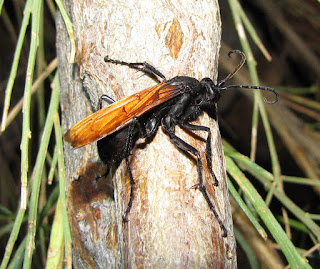 Once a male wasp claims a lookout tree, it vigorously defends it from competing males. Most interactions consist of the resident male flying off his perch in a brief foray to chase away the intruder. There is usually only feeble resistance, if any, from the interloper. Males that have been displaced from their own territories, however, are more likely to try and displace another male. This takes the form of long, ascending flights in which the wasps spiral around each other as they climb to heights of thirty feet or more. Sometimes they escalate to altitudes where they can no longer be observed without binoculars. 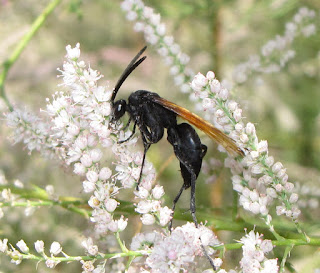 These aerial duels are contests of both endurance and speed. The faster and fitter male is thus the one more likely to win.

Female wasps cruising past an occupied tree elicit an entirely different response. The resident male gives chase and, if he successfully reaches her, attempts to couple with her in the air and descend to the ground. There, they mate briefly if she is receptive. The male then returns to his perch, which he hopes has not been claimed by another male while he was um, otherwise engaged. 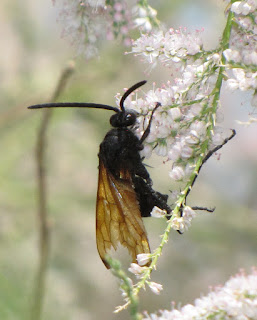 This form of territoriality is called “landmark defense,” and it is the strategy of choice in situations where defense of a resource used by females is impractical or impossible. While blooming palo verde trees might seem to be a nectar source for female tarantula hawks (and they are, for Pepsis chrysothemis), females of Hemipepsis ustulata seem to prefer the flowers of creosote bush, which has a wide and scattered distribution in the landscape.

Once mated, a female tarantula hawk goes about the business of finding occupied tarantula burrows and baiting the spider into battle aboveground. These burrows are also widely scattered. So, male wasps can’t stake out a tarantula “colony” because there is no such thing, at least not for spiders the size needed by the female wasp. 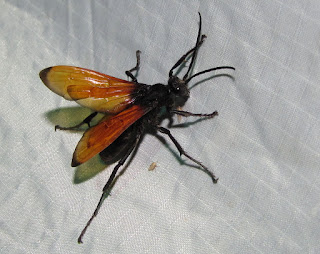 Some of the hunting activities of these wasps may take place at night, or at least at dusk, for I have found females in southeast Arizona coming to blacklights at night. I have also found females feeding on oozing sap of Desert Broom (Baccharis sarothroides). Here in Colorado Springs I have seen both genders at a blooming saltcedar tree (Tamarix sp.), though the female simply circled the tree and flew off again.

Hemipepsis ustulata ranges from southern California east through Nevada to Texas, Oklahoma, and Kansas. It would be well worth it to accumulate more records of this species. More county records are certainly possible, and perhaps state records, too.